The Mario Tennis series is a bit like that former tennis prodigy who never quite broke through to the big time.

Early signs of spontaneous genius appear to have been gradually ground out of them, as they turn into a thoroughly solid but firmly second-tier pro.

Those hoping that Mario Tennis Aces would be the entry to swear at the umpire and rip a jumping topspin lob over its recent history are in for a disappointment, but there are glimmers of the old maverick spirit.

Working on your shots

Just like Mario Kart 8 Deluxe is to real motor racing, Mario Tennis Aces is to the game of tennis.

That is: a hyper exaggerated but still recognisable form of the sport, as played by an extended roster of major and minor characters from Mario's day job. No, not plumbing. His second job. 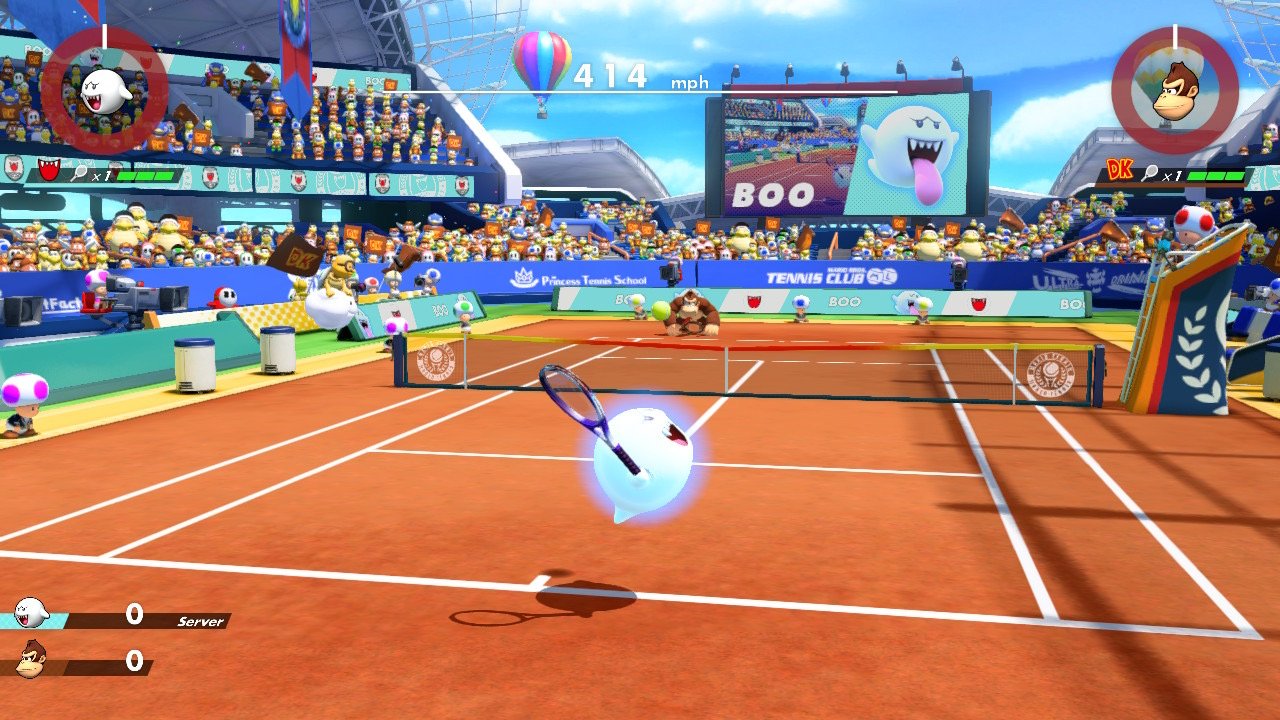 Mario Tennis Aces features a surprisingly faithful game of tennis at its core. Each of the Joy-Con fascia buttons is given over to a shot type, enabling you to pull off flat hits, top-spin rippers, curvy slices, vertiginous lobs and crafty drop shots.

You can impart extra power on each of these by holding the relevant button for longer, but this will slow your movement right down. The key to success, then, is in anticipating your opponent's shot and getting yourself into the right position to wind up a belter.

Unless you're playing Mario Tennis Aces's Simple mode though, there's a lot more to consider beyond the standard rules of tennis.

Star shots require careful positioning and a press of R or ZR. When this happens, the camera pulls in and a target appears on the opposite side of the court, potentially resulting in a tough-to-return belter. 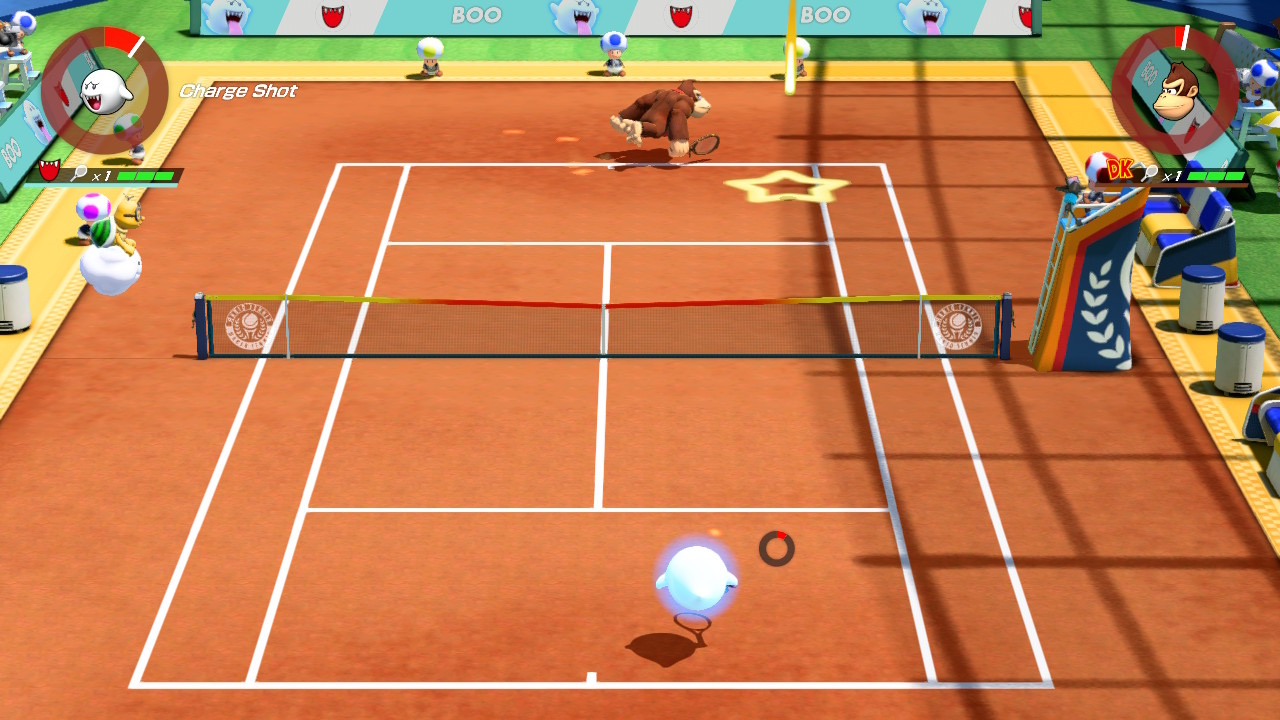 Tough, but far from impossible. Holding that shoulder button in open play will give you a dose of Matrix-style bullet time, which lets you get in position to block those star shots with a stab of A. Mis-time that block, however, and you'll damage your racket.

By building up your energy meter to full through fully-charged shots, you will be able to tap L or ZL and initiate your player's special shot. This is like a souped-up star shot, and is even harder (though again, not impossible) to block.

Finally, the right virtual stick initiates a Trick Shot, which gives you a last-gasp chance to dive for a distant ball.

That's rather a lot to digest. While it's easy enough to pick up and play, Mario Tennis Aces demands an awful lot of study and practice from any player determined to perfect it.

This makes it a brilliant multiplayer game, if you can get two or more well-matched players together locally (still the best way to play) or online. 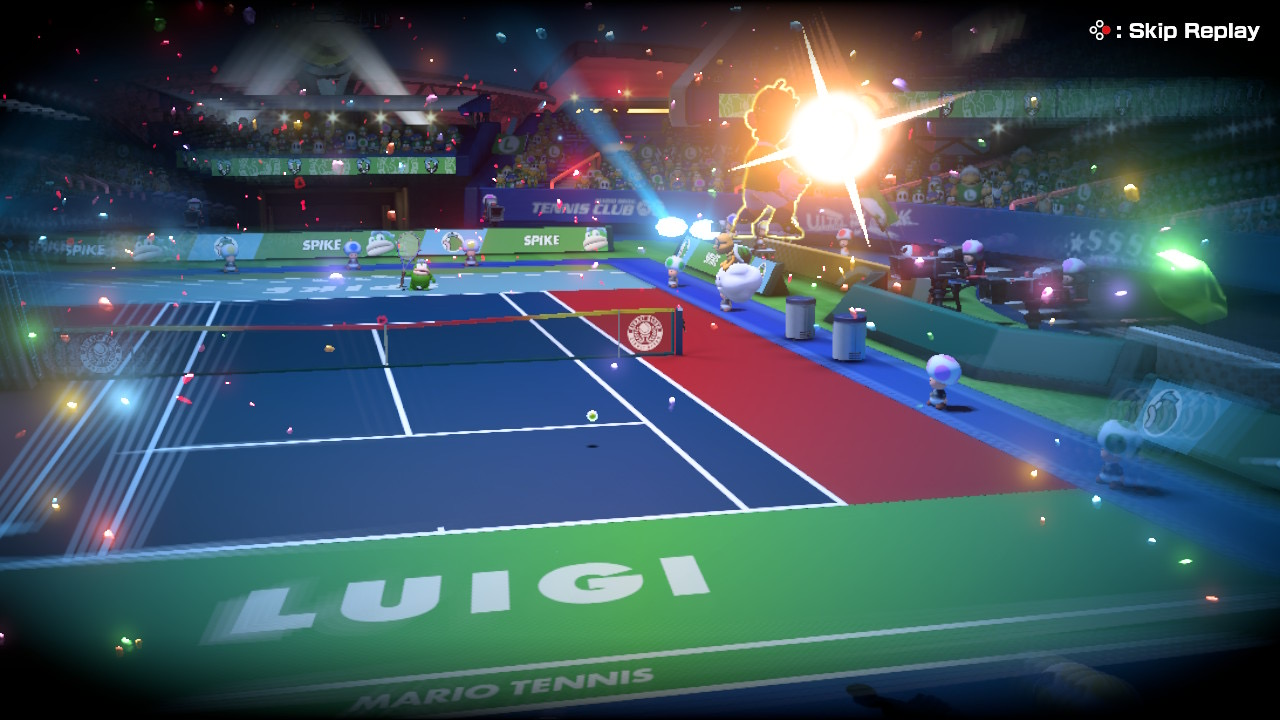 Make no mistake, Mario Tennis Aces remains a multiplayer game at heart, and it's packed full of options and quirky modifiers to fuel hours of friendly competition. There's even a motion-controlled swing mode for casual play, though it isn't as intuitive or fun as the classic Wii Tennis.

Mario Tennis Aces will comfortably slot in right behind Mario Kart 8 Deluxe at your next couch co-op get-together. Online players are well catered for too, though I struggled to get a game prior to launch day, so can't comment too much on that side of things.

The early handheld versions of Mario Tennis were brilliant because they featured an involving single-player RPG adventure to make up for the lack of ready multiplayer. For some reason, Nintendo and Camelot treated this as an either/or scenario, and so console Mario Tennis sucked for content-starved solo players. 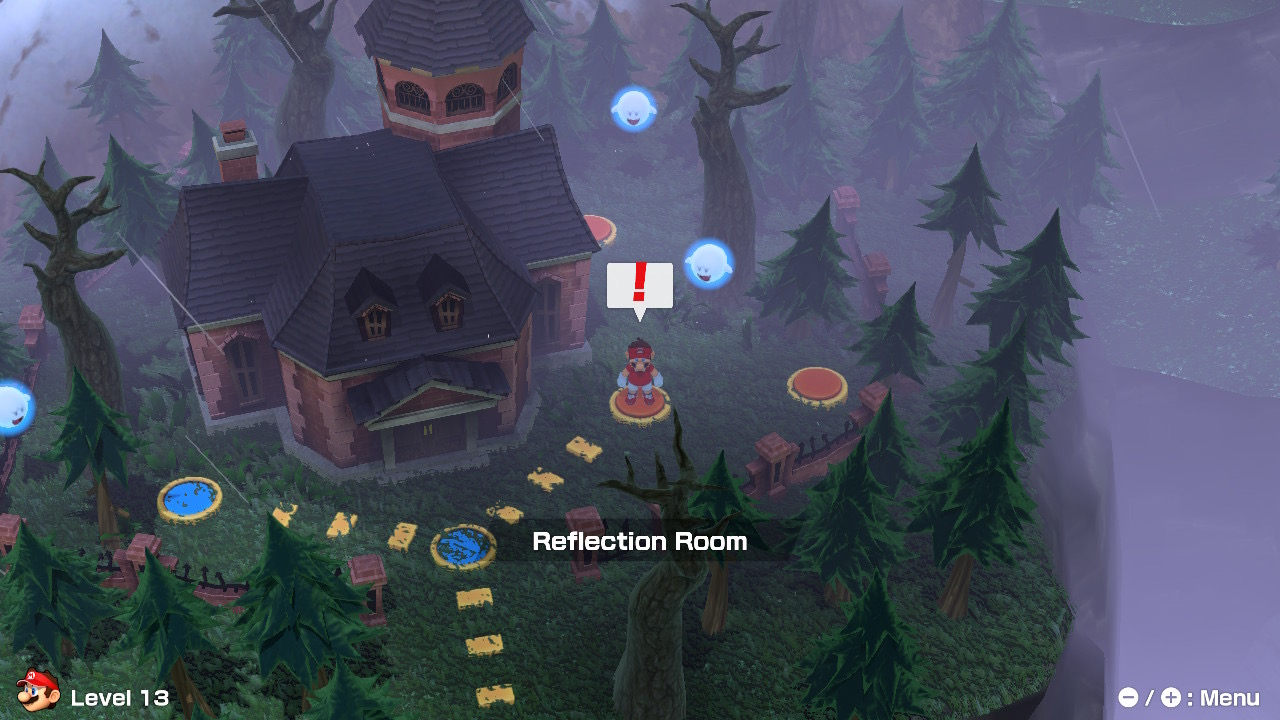 Mario Tennis Aces makes some attempt to address this shortfall, but it's not wholly successful. Adventure mode places you, as Mario, in a series of fantastical but tennis-themed scenarios. You might need to knock down a bunch of piranha plants, like a game of Whack-a-Mole, or take out a towering boss with special shots.

There are matches, too, which incorporate novelty elements - a ball-diverting mast in the middle of a pirate ship deck, for example.

These bite-sized challenges are clearly intended to help you master the tricky mechanics of the main game, and in that way they reminded me of Splatoon 2's single player campaign.

The only trouble is, it's nowhere near as fun. Whereas the former was so polished and imaginative it felt like a fully fledged platform-adventure, the single player Adventure in Mario Tennis Aces feels more like a series of mini-games - albeit frequently entertaining and challenging ones.

There's the slightest semblance of a story knitting it all together, but these barely-animated talking heads overlaying a pretty basic overworld map speak to a mode that feels a little half-hearted.

Which leaves solo players with three basic tournaments to enter - only the last of which really presents any form of challenge. It's better than before, but it just doesn't feel like enough somehow.

Mario Tennis Aces, then, is an accomplished multiplayer knock-about that offers a slick and rewarding brand of tennis. It's just a bit of a shame that it isn't better equipped for the singles tournament.

A highly entertaining and surprisingly nuanced multiplayer game that comes up short with its single-player offering
By Jon Mundy
| Jun 20, 2018 |
Switch
Find out more about Mario Tennis Aces

The humorous strategic city-builder, Tropico, is headed to iPad later this year