By Harry Slater
| Mar 29, 2018
iOS
|
Hyperforma
Get Hyperforma on...
Find out more about Hyperforma
Available on: iOS

Cyberpunk games are nothing new on mobile, but Hyperforma takes futuristic hacking in some pretty interesting new directions.

For one thing it's set entirely in cyberspace, and sees you trying to break into computr systems that have been abandoned by some ancient civilisation.

It also mixes together ideas from puzzlers, shooters, and arcade games to make something that, while it isn't perfect, does hit some pretty good notes from time to time.

Essentially the game is like a more complicated Breakout. You need to clear out the blocks surrounding a central node, then smash it. You start things off with a flick, which sends your avatar bouncing into space.

There's a button at the bottom of the screen that lets you launch an attack. These are always aimed at the node, but you won't hit it if it's still surrounded.

As the game progresses you unlock other tools to use in your attacks. One gives you more power, for example, where another clones you so you're coming in to break the defences from different angles. 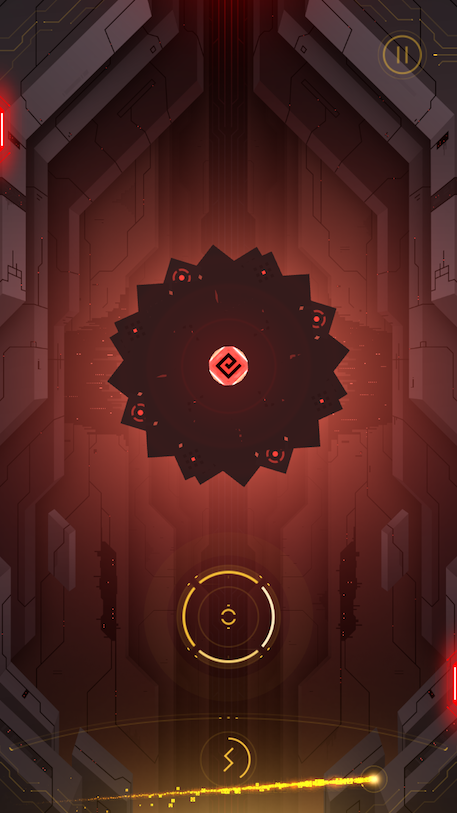 The most interesting thing the game throws at you is the way you can change your view of the blocks. They're in a 3D shape, and you can twist them round to find weaknesses to exploit in previously hidden parts of the structure.

There are red markers at the side of the screen, and these move when you move the core you're hacking. Hit one of them and the challenge resets. There are blocks that do the same when they flash red, and other blocks you can use to change the shape you're smashing into.

For the most part the game is fun, but it can be a little frustrating at times when you keep dying. And while the story is nice, some of the cutscenes do drag on a bit and keep you away from the action.

Where the game falls a way a bit is in its repetition. While you do get new moves to use, things essentially play out in the same way time after time. And when you've chipped away most of the blocks only to hit a red bumper and die, it's easy to give up.

Hyperforma is by no means a bad game, and it's got its own unique style that makes it a joy to watch. But eventually things just start to feel a little bit flat.

And that's a shame. This one's probably worth a download, but it's not going to really rock your world in the way it could have done.

There are some great ideas in Hyperforma, but they get a little bogged down a little too quickly
By Harry Slater
| Mar 29, 2018 |
iOS
Find out more about Hyperforma
SEE COMMENTS

Become a powerful spellslinger in World of Wizards

App Army Assemble: Hyperforma - Is this cyberpunk arcade game as clever as it looks?