Take with a pinch of salt as always

Yes, you read that right. It's possible that Crash Bandicoot's awesome remastered trilogy will be coming Nintendo Switch (and PC) later this year and, truthfully, I'm pretty surprised by it. 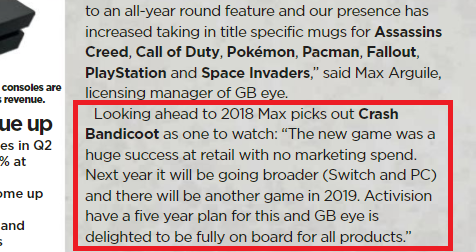 First brought up on Resetera over the weekend by user Wrestleman, it was noted in the new Licensing Source Book Europe (page 97) by Licensing Manager of GB Eye, Max Arguille, that the game's remaster was a huge success and will be going broader in 2018. Oh, and there could be a new Crash game coming but I have to freak out about that in my own time.

Aside from the fact the Nintendo Switch would be such a perfect platform for Crash Bandicoot to call home, if proven true this'll be the first time in 22 years the original three games will have made their way outside of PlayStation.

I know a handful of other Crash games came out on different platforms, but not the originals.

For me, someone who grew up alongside the PlayStation consoles, this is huge news. Crash Bandicoot was one of Sony's flagship games in the 90s, so by opening its doors to Nintendo after the Switch has been out for less than a year goes to show how much of a success the portable console is.

Back to the game itself I had a blast with N.Sane Trilogy on PlayStation 4, so bringing it to Switch feels like an excellent move. The controls aren't complicated, there won't be too much of a demand on the system, and it probably won't be too big a file either.

Of course, none of this has been officially addressed so we'll have to wait for Activision to confirm/deny it.

What do you guys think about this move? Would you love to have the game on Switch? Or, do you think it should stay a PlayStation exclusive? Sound out in the comments below.

Night in the Woods Switch review - A strong, narrative adventure that sticks with you until the end