Shooters on mobile are, generally speaking, fairly drab affairs. More often than not they feature wonky controls, repetitive gameplay, and an abundance of the colour brown.

Hero Hunters initially seems like it's going to be much the same, but by the second mission it opens up to become a very enjoyable experience.

Its core gameplay is chaotic and blissfully fun, it has a ton of content to keep you playing for hours at a time, and it's perfect for short bursts of action if you prefer your games that way.

Holding out for a hero

Hero Hunters may seem slightly familiar at the beginning -you're an army man, rooted to one bit of cover, and you need to shoot every bad guy coming at you.

You aim by holding a thumb on the left side of the screen, and fire with a button on the right. You can also swipe on the right to duck down behind cover or run to new shelter if yours is taking too much damage. 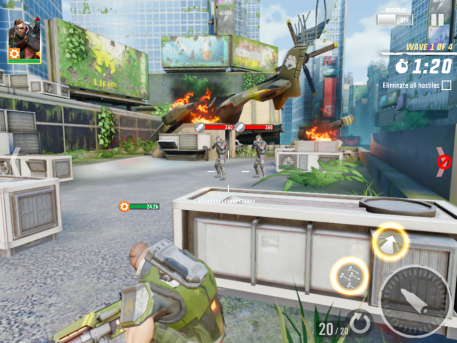 This could get repetitive fast, but luckily you also have up to four other teammates in your squad and can switch between them whenever you like during a firefight.

Your team will be placed in various spots on the map depending on their weapons - shotgunners lead the pack, rifle owners stay in the middle, and snipers are placed higher up and further back.

This means that, should you find yourself struggling to land shots, or you're just bored of using the same weapon, you can tap away to another unit and get a new perspective on the battle.

We could be heroes

You don't need to worry about your other teammates either, as the AI is almost too good, blasting away enemies with ruthless efficiency, and only dying if they're under-levelled for the mission you're in.

Your squad is so good that you can easily flick on auto-play if you really want to, but the gunplay in Hero Hunters is surprisingly tight, and there's always plenty to shoot at, so it's rare that you'll take the easy way out. 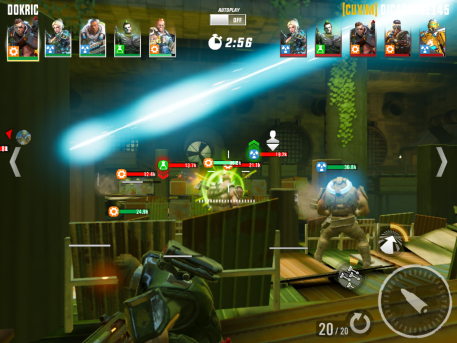 Outside of the main campaign you'll find regular events, daily raids, and online PvP, all of which provide a subtle twist on the central formula.

PvP in particular plays like a dream and doesn't limit your playtime as long as you're doing well - each unit has three lives, and once they lose all of them, they can't be used for a short while.

There goes my hero

There's also plenty of gear to find and equip, new characters to unlock, and stats to sink your teeth into. Basically there's enough here keep you going for a very long time.

Hero Hunters is, in short, a great game. It's fast-paced, tons of fun, and offers enough variety and depth that you won't get bored of it too quickly.

Initial impressions might turn off some people, but stick with it past the opening five minutes and you're sure to be hooked.

It gets off to a rocky start, but Hero Hunters is a fantastically fun shooter that will soak up plenty of your time
By Ric Cowley
| Feb 5, 2018 |
iOS + Android
Find out more about Hero Hunters