You'll be smashing through Geometry Dash SubZero with this guide

Geometry Dash SubZero is hard. Not surprising news to anyone who has already played a precision platformer before, but that still means that even clearing a single stage can be a trying test.

Press Start is the first stage and clearing this means you truly have the skills to take on even the most pixel-perfect platformers, so strap in for a world of hurt, because you’re certainly going to fail before you succeed.

Take it slow and follow these steps, and you’ll soon have the skills to triumph in Geometry Dash SubZero. 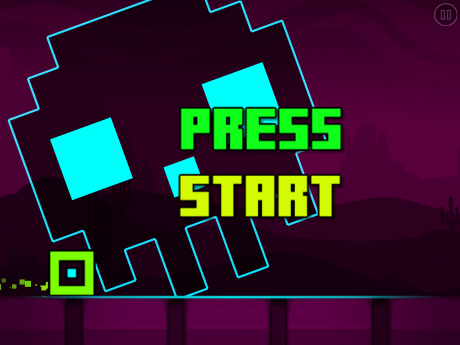 Luckily the intro to this song starts slow, so you can get your head ahead some simple jumps before they throw you into the thick of it. You’ll notice that jumps can be timed with the music for extra precision, and it’s much easier to play once you get a feel for the beat.

Some platforms requires dropping off them, instead of jumping, in order to be safe. Be aware of when there are obstacles overhead, both in the early part of the song and throughout, it’s easy to be caught off guard.

Soon, the song will kick in with a “Press Start” battlecry. You’ll quickly notice that glowing pads on platforms will launch you, and you can tap when passing over spheres in the air to continue moving forward. It takes practice, but you’ll get it. 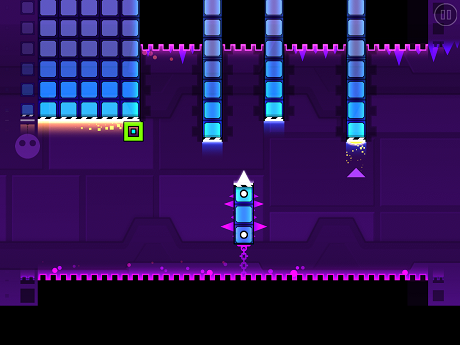 Dancing on the ceiling

Spheres can also fling you onto the ceiling where you’ll have to deal with reversed gravity. Luckily it’s not too much different from being on the floor, you just have to be extra aware of objects “overhead” before you take jumps.

After this, your cube will essentially guide itself to a flight section.

Here you must simply not crash while keeping your trajectory on course with small, frequent taps to keep your nose up.

It’s not a long section, but the juxtaposition in control can be weird at first. Remember how it feels for another flight section later. 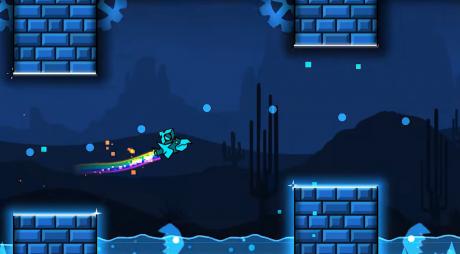 After a standard cube platforming section you’ll be chased by death himself. Or, a big skull, at least. Your jumps in this section will be much bigger, allowing you to clear big distances, but you still have to be aware of obstacles overhead.

After a short section where you platform like this on the ceiling, it’ll be back to one more short flight section before we come near the end of the stage. 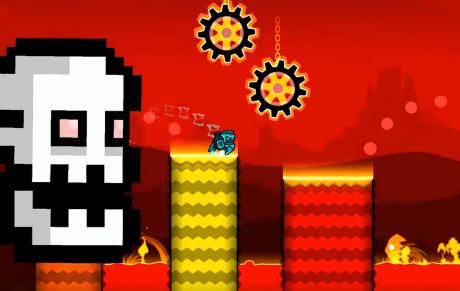 There are two rooms here where the game stops autoscrolling, and instead you must bounce your cube off of spheres to guide it around this room.

It’s not too different from the rest of the stage, but it’s difficult to plot out your route at first, especially in the second room. Again, if you’re wary of overhead obstacles where you can’t jump, you’ll make it through.

We’re near the end - there’s one more standard quick cube platforming section before a flight section. In this bit though, death will be firing lasers at you.

You can avoid them by staying near the top, or weaving between them. Just be aware they come from his mouth.

After all of that hard work, you should now be a Press Start champion! Does it feel good?