Sometimes even the idea of a new Sonic game fills me with an unshakeable existential dread. It forces me to remember the past, to cling on to something that's so far back in my memory now as to be a spot of brightness in an almost never ending field of black.

Maybe that's why I enjoyed Sonic Runners Adventure so much. Because it's not another knife lodged in the spine of the series. Because it's actually, whisper it, pretty good.

I mean it's not Sonic 2. But it's not Shadow The Hedgehog either. It's bright and quite fast and there's jumping to do. And it rarely takes a moment out of its schedule to spit nonsense narrative into your eyes and mouth.

The game is a side-on auto-running platformer. It's in a similar vein to the Rayman Run series, but it doesn't quite manage to scale the heights that those beautiful games did.

You're controlling your jumps here. You need to leap over gaps, bonk robots on the bonces, and finish challenges before you get to the end of each level.

And that's about it. There are some different ideas thrown in, like looped levels that push you to take different routes every time, and limits with ticking clocks that make you find the quickest path. 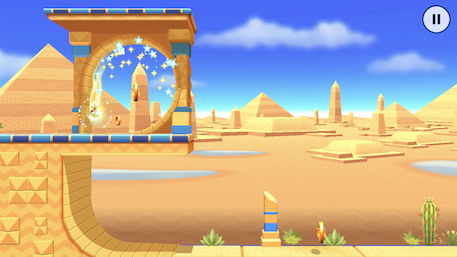 There are boss fights against Doctor Robotnik as well. And no, I will never call him Doctor Eggman. I don't care. These are reasonably formulaic, but they break up the game and stop things from becoming stale.

You'll rush through sections where you have no control over anything as well, which seem to be there just so you can have a rest, I guess?

So no, Sonic Runners Adventure isn't perfect. There are frustrations here, and some of the levels feel like they could have done with an extra month or so on the designing board.

But, and this is a big but, there's still fun to be had here. The game rolls along nicely, and there's enough here to keep your fingers and your eyes busy for a long while.

So while it isn't the greatest game in the world, it does go some way to cementing Sonic in the middle of the mobile platforming pack.

And considering the damage that's been done to his reputation in the rest of the gaming world, that's no bad thing.

It's not classic Sonic, but it's a lot more fun than you might be expecting
By Harry Slater
| Dec 21, 2017 |
iOS + Android
Find out more about Sonic Runners Adventure
SEE COMMENTS

Out There Chronicles Ep 2. is finally coming to iOS and Android in January