Doesn't seem to be the case

Pukk is the perfect endless runner to play around the holiday season. It's set in the frozen north of Sweden, with you playing as the eponymous treasure hunter as he strives to smash through ice in search of gold.

Meanwhile, Pukk is pursued by a lovesick polar bear who just wants to give him a hug. Poor polar bear.

You'll open loot boxes to earn gear that makes Pukk look even cooler as you avoid obstacles and traps, and gobble up all of the treasure.

But is it any good? That's exactly what we asked the App Army, and here's what they had to say.

After getting over the initial intrigue of why a polar bear is bouncing a guy's decapitated head down an icy path, what I found was once of the dullest experiences of recent months. I find it very difficult to write much about a title with so little imagination or gameplay twists.

Just like all endless runners out there this has been cobbled together seemingly in the hope kids will pay out some cash for customisable junk - in this case hats.

If you want an endless game, there are better out there. Avoid this one. 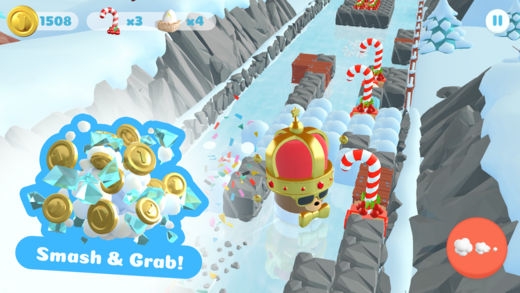 I agree with Paul, it really is a very dull game. A game where you shuffle forwards slowly by going side to side as quickly as possible while escaping an amorous polar bear.

You'll fail to escape though because you don't realise that going sideways is the way to go forwards. Then you'll clip a box at slightly the wrong angle because of the silly sideways movement again.

Finally you'll get the hang of it and it becomes rapidly dull.

I can’t really disagree with what has already been said. The mechanic of bouncing from side to side makes smashing the blocks imprecise at best and annoying at worst.

Personally I find most endless runners boring, but they're good for killing a few minutes when waiting for a bus or a train. This is no exception, but the imprecise controls mean it rapidly becomes annoying.

The graphics and sound are functional. I doubt I’ll be loading it up again in future.

Nice cartoony graphics, but the game is so boring and repetitive. Not one of the better endless runners. 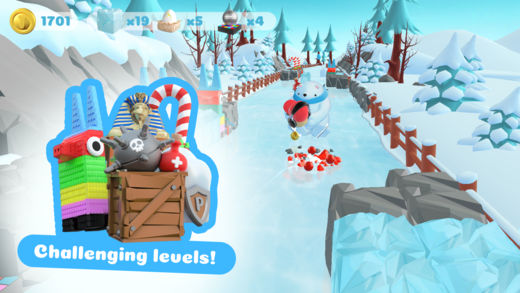 I honestly don't know what to say about this game. You bounce from side to side trying to hit blocks. And so far, that's about it. It entertained me for about 30 seconds and then I lost interest.

If it was even a little bit of fun then I would probably persevere and see where it goes but it's just too painful to play.

Only have a hand free to play a mobile game? Need to dress a headless body in silly hats as it bounces along an icy lane? Then look no further. That is literally all this game is.

It's really hard to find the fun here. It’s really simple, but the premise of smashing blocks of ice by sliding side to side is boring and just not fun.

Also why is that bear constantly chasing you? I honestly don’t like the game enough to care.

It has one finger controls which quickly get boring. No real skill is required, but I guess it’s a perfect game if you just want to waste a few minutes. 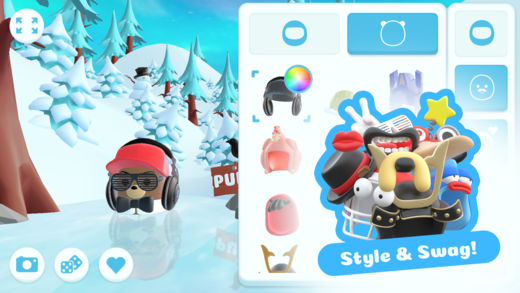 Pukk is an icy block-breaking runner, coming to iOS and Android in November