Mille Bornes fits firmly into the family friendly board game category. It's all bright colours and simple rules. If you're looking for something in depth or challenging, then you're driving up the wrong road.

But if you fancy something that'll keep the kids quiet on a less digital car journey, then it's probably worth checking out.

The game is played with cards. Each turn your character can chuck a card down. This might move them down the road, or it might put an obstacle in the path of one of their opponents.

The first person to get 1000 metres down the road is the winner. And that's about all there is to the game. Different maps add a few different ideas like shortcuts and games of chance into the mix, but they don't shake the basic formula too much.

Because the cards are dealt out at random you'll sometimes find yourself stuck in the same place for a good long while. Or you'll drive out in front of the other players and never look back. 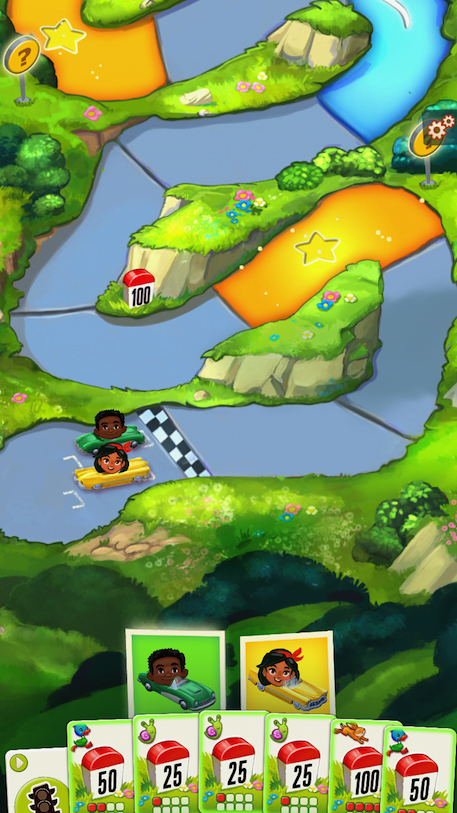 You control everything by dragging cards around. In games with more than two players you need to drop obstacles onto a specific portrait. If you can't play a card, you need to discard one from your hand.

Mille Bornes isn't the most exciting board game out there. It's reasonably quick-paced, but unless you're playing with real people there's not that much to sink your teeth into here.

Throw some friends into the pass-and-play mix and dicking other characters over becomes an awful lot more fun.

Mille Bornes isn't going to make it onto any game of the year lists. It's solid, but unremarkable. The digital adaptation is slick, but the game underneath it just isn't as interesting as it could be.

If you've got younger players to entertain then it might be worth a look, but there are probably other games to check out before you whip this one out.

The presentation here is excellent, but the game underneath it all is only going to hold the imagination of younger board gamers for long
By Harry Slater
| Nov 28, 2017 |
iOS + Android + Steam
Find out more about Mille Bornes

Robot-meddling puzzler GNOG is out now for iPhone and iPad