A dark elf sorcerer, a warrior, a blood knight, and an elf walk into a tavern. They have a brief chat with the cowardly locals, then wander off to a nearby dungeon to whomp horrid beastmen in the face and loins.

That's pretty much the plot of Warhammer Quest 2. Not that it's the plot that you're going to give two hoots about. What's going to drag you into this strategic RPG is the combat. It's tactical, it's taut, and it takes no prisoners.

Throw in a bunch of gear, a smart levelling system, and a whole host of characters to collect and you're left with one of the shiniest turn-based battlers we've seen on the App Store for a good long while.

The game takes place in some of the dankest corners of the Warhammer world. You can expect to fight giant spiders, skittering beasts, and all manner of other abominations as you work your way through.

Everything is controlled with taps. Each of your characters has a pool of action points they can spend on each turn. Moving one square costs one action point, and the cost of performing an attack varies from weapon to weapon.

Firing a bow is three action points, but swinging a mace will only set you back two. Your characters can have a couple of weapons equipped, giving you multiple options in battle. That's especially useful because different weapons have different damage types. 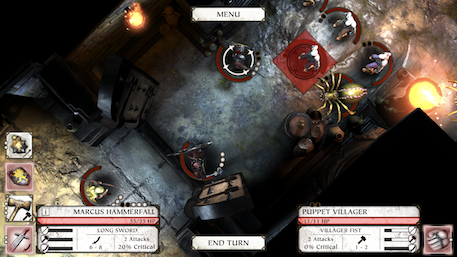 There are three types, and different monsters are stronger or weaker against specific kinds of damage. Swapping between weapons and learning about your enemies is the key to success in some of the tougher battles.

There's a real feeling of desperation to the game, which is fitting considering its decidedly apocalyptic setting. Even when you've got a full team of seasoned veterans at your command, the dungeons full dangerous.

You'll be equipping new gear regularly, and toughening up your heroes at the training grounds you visit. There are random events when you're on the road as well, and they serve to make the world feel alive.

Warhammer Quest 2 builds on the successes of its predecessor. It feels more like a game in its own right though, less tethered to the board games that inspired it. And that can only be a good thing as far as I'm concerned.

Even if you don't care about the Warhammer lore that's oozing out of the game's every dank crevice, you're going to find a wonderfully put together strategy skirmish game here.