Kick Ass Commandos is a wonderfully violent top down shooter that packages its slaughter into neatly mobile-sized chunks.

There are some neat ideas here as well that keep the action on the right side of chaotic. There are a few problematic choices here though that some players might be uncomfortable with.

Still, when it comes to thick and juicy shooting, you'd be hard pressed to find anything better that's hit the App Store this year.

The game wears its retro inspiration on its sleeve. And it's not just in the chunky pixel graphics. There are 80s action movies references woven into the fabric of everything you do.

It's no accident that almost every level sees you having to get to a chopper. There are bandanas and heavy weapons aplenty here. You often feel like Schwarzenegger mowing down waves of incompetent goons, and that's no bad thing.

Sometimes though you've got some help. You can collect prisoners who join in with the shooting. They have their own health bars, and they move and shoot at the same time as your main hero. 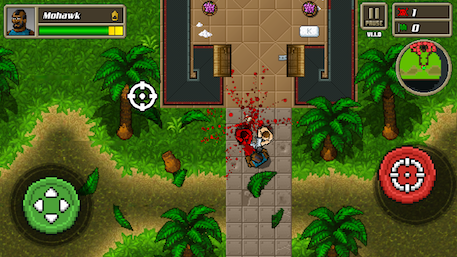 While some of these prisoners are essentially cannon fodder, others you're going to need to keep alive to complete your missions. This is sometimes easier said than done when entire armies of heavily armed soldiers are bearing down on you.

Other missions see you blasting tanks, taking down specific soldiers, or just murdering everyone that moves. Some of the game's ickier moments come in those slaughters.

One is called "Don't Drop The Soap" and involves killing a lot of naked people in a shower.

It's not enough to ruin the fun, but it does feel a bit unnecessary. Sort of like those optional levels in CoD games that added nothing but shock value to the experience.

Still, there's a really good game here. The violence is poised almost perfectly between the past and the present. The controls are sharp, and the challenge level is pretty much spot on.

For just a few quid you're unlikely to find a better retro arcade blaster anywhere. And that's high praise indeed.

A tight blaster that has a few problems with tone, but is still an awful lot of fun
By Harry Slater
| Oct 11, 2017 |
iOS
Find out more about Kick Ass Commandos

The Gold Award-winning Thimbleweed Park is now available on Android