Augmented Empire is one of the most anticipated Gear VR games of the year, and for good reason.

Not only is it visually stunning, it's also got a top-class voice casting and 10+ hours of story to delve into. But was it worth the wait?

The game throws you into the deep end almost immediately, giving you half a minute in the office base before pulling up a tiny, augmented stage. Here, you get into a fight pretty much straight away.

Over the next twenty minutes or so, depending on how much you die, you're taken through a few introductory levels, filled in on some back story, and taught the basics of surviving. 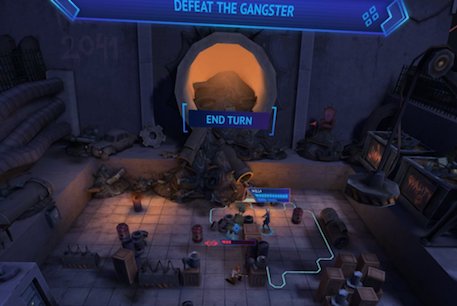 The controls are super simple. If you're playing with one of the Gear VR's new motion controllers things are a little less static. Otherwise, you can use the touch pad by pressing and holding to bring up more menus.

Where the tactical, turn-based combat's concerned, you start off with only a couple of moves to choose. You're basically taking cover or attacking.

Dodging shots and firing your weapon works in the same way -when a bar flashes up on screen, tap at the right point or miss your chance entirely.

Sure, it's pretty straightforward, but the defensive-side of things is a bit more complicated. Depending on whether you've gotten to appropriate cover, you have one point where you can avoid an attack and several where you can get hit. With only a small amount of health to go on that's not ideal.

Each character also has their own skills wheel which can be used strategically in combat. These each have their own cool-down period, however, so use them wisely.

The voice acting and script are a very high in quality, as are the gorgeous neo-noir visuals. They're a big part of what makes the game so endearing.

Whilst this isn't an issue to begin with, after half an hour of play the Gear VR does start to weigh quite heavy on your neck.

The nature of the isometric view also means that it's easy to mistakenly select a tile on the grid and waste a turn if you want one that's further away. 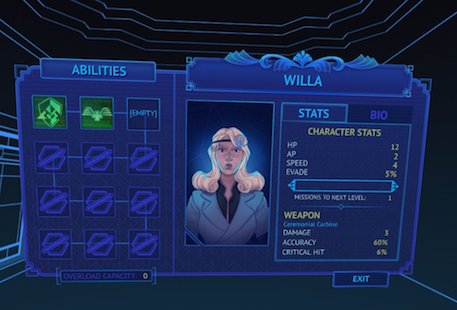 Though the controls are straight forward, the defence-side of things can get a bit confusing. Most of the time you'll find you get 'grazed' rather than managing to avoid the enemy's attack altogether. But I think it's a case of practice makes perfect.

Augmented Empire is definitely one of the better Gear VR games out there. Virtual reality in itself is a bit of a niche market, but Coatsink's take on it offers up way more than you'd originally think.

Unfortunately it does suffer from the nature of the platform itself as the game can only be played in short bursts. If the discomfort of the headset doesn't get you first, the eye strain certainly will.

But, with a decent storyline, great voice acting, nice visuals, atmospheric and fitting music, easy controls, and an interactive tactical combat system, it ticks a lot of boxes.

And with all of those boxes ticked, the end result is an entertaining experience.

Augmented Empire is a wonderful experience let down ever-so-slightly by the Gear VR's comfort and its occasional flaky controls
By Emily Sowden
| Jul 20, 2017 |
Gear VR
Find out more about Augmented Empire