Quantum Revenge is a twin-stick shooter that blends together ideas from the likes of Asteroids and a raft of bullet hell shooters.

And for the most part those ideas stick together pretty well. It's not without its problems though, and there's a sloppiness to the whole thing that might put some people off.

All the same this is an entertaining, if reasonably blunt shooter that's likely to appeal to anyone who's got a soft spot for mechs and explosions.

The game sees you piloting a robot through the depth of space. Waves of enemies come at you from every direction, and you need to blast them to smithereens.

A joystick on the left controls your movements, one on the right controls your shots. You've got a special power that builds up as you play as well, which you unleash by holding down a button above the right stick. 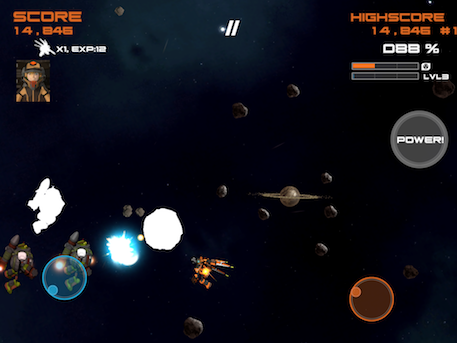 There are weapon drops too, which change the blaster you're using. The more XP you collect, the stronger your weapon becomes. But if you get hit or miss things your XP goes down and you lose power.

It's an interesting system, but it's never brilliantly well explained. There are bonuses for completing the levels with style too, but again this feels like an idea that's tacked on without being fully fleshed out. 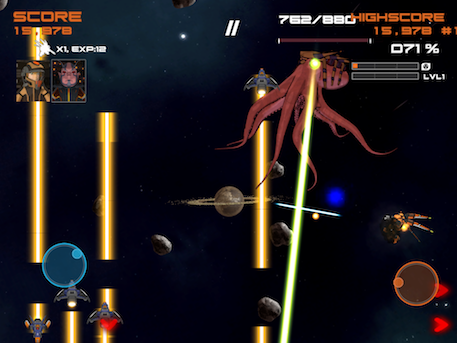 Quantum Revenge follows a steady path to get to where it's going. There are boss fights, new enemies, and everything you've come to expect from arcade shooting experiences on mobile.

But it's all very raw, and there's a chaos to proceedings that often feels more like bad design than the hectic comings and goings of deep space combat.

You're going to have fun blasting through Quantum Revenge, but it's a fun that's not going to last long. The progress here is a little stilted, and once the enjoyment wears off, it's gone.

Quantum Revenge can't quite justify its price tag. It's an entertaining slice of gaming, but it doesn't have the depth to compete with the very best.