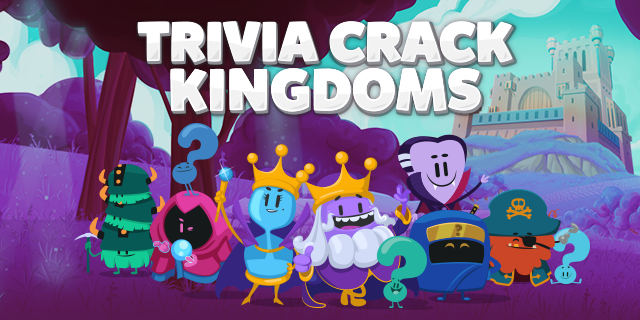 Trivia Crack Kingdoms is a sequel to the enormously successful Trivia Crack, a fun quiz game in which you challenge your friends to see who is the ultimate trivia champion.

Trivia Crack Kingdoms massively changes the formula, removing the pinwheel in exchange for trivia channels that you can create and choose depending on your favourite subjects.

Brands, organisations, and educational institutions can also create their own channels to educate you about their new products, the issues the world is facing, and subjects you're already studying.

Maximo Cavazzani, Founder and CEO at Etermax, believes that it's the enormous variety in subject matter that the channels offer combined with the attractive visual style and accessibly addictive gameplay that really sets Trivia Crack Kingdoms apart.

Cavazzani: "It's the first time that a game opens up its platform to the community. It will offer institutions, NGOs, brands, and everyone the chance to create their own trivia channels and share their knowledge with their friends and people they want.

"With Trivia Crack Kingdoms users will choose in what category they want to play. For example, fans of Harry Potter will be able to play on the Harry Potter Channel, fans of Game of Thrones will challenge other users in the Game of Thrones channel to see who knows more about their favorite series.

"The most important brands and NGOs are already part of the game like Time Inc and several of its publications: Sports Illustrated, People Magazine, and Food&Wine, and then there's others like iHeartRadio, Oreo, and Comcast NBC.

"Trivia Crack Kingdoms will constantly be updated with new channels and fresh and funny content.

"It's characterized by an unprecedented visual attractiveness in a trivia game, with addictive and accessible gameplay. It's an all-in-one: it has great variety of interaction capabilities: live chat, challenges, social network integration, the possibility to create custom trivia channels, and to meet people from all over the world."

Development wasn't easy though. The technology that fueled Trivia Crack had to be built from the ground up to handle the changes and an entire app store had to be built in game to support the multiple channel structure.

Cavazzani: "Trivia Crack Kingdoms gives the tools we use in Trivia Crack to everyone to generate great content.

"We had to rebuild the technology to handle multiple channels and to guide the content creators. We also had to build an “App Store” with all the functionalities required for the users to find a follow channels. These are just two of the many challenges we faced during development."

But Cavazzani is proud of what the team has achieved because he believes that Trivia Crack Kingdoms provides, not only a new way to educate people, but that it will change the way that companies communicate with the public.

Cavazzani: "I believe Trivia Crack was a proof of concept on how to educate in a new way. The technology developed helped everyone participate in the content and serve it in the form of a game to attract people for them to learn.

"Trivia Crack Kingdoms is far from just a sequel. It takes the concept to a whole new level, and changes the direction of the product from a game to a platform.

"I believe it’s so revolutionary it will change the way companies, organisations, and regular content creators communicate with the public. This is “the” next thing in social media and being able to think and develop this as a young company, makes me very proud."

Etermax isn't finished there though. Plans are already underway to update the game.

Cavazzani: "We are working on the next updates that will come out in the future version of Trivia Crack Kingdoms. Stay tuned!"

Beggars can't be choosers - but can they be heroes in the Beggar's Ride?