The revolution has arrived

VR technology has come a long way since 2013, when I first put on an Oculus Rift and endured the strange sensation of a rollercoaster ride while standing up.

Competitor HTC Vive is looking to leapfrog Oculus before it even hits the market, while Oculus is attempting to hold its advantage with Touch – a pair of odd-looking 'half-moon' controllers with trigger and face buttons and a thumbstick.

Through sheer chance I managed to get a demonstration of Oculus Touch at Gamescom, and it was a revelatory experience.

Welcome to the Toybox

After being introduced to my guide - Mustafa - in a small grey room with spikes on the walls, I was led by a second assistant into an identical adjoining room, told to stand on a cross on the floor (for the tracking camera), equipped with a mask, headphones, and controllers, and plunged into darkness.

Then a blue spectral head and hands appeared in front of me and started talking. At first, because I'm not very bright, I assumed it must be a tutorial animation, but it was actually Mustafa in the next room, wearing his own gear and being tracked by his own camera.

He summoned a table between us littered with various objects - blocks, a toy robot and a toy truck, a table tennis paddle and balls – and explained that to pick them up I needed to squeeze the trigger button to make my virtual hands form a grip.

Almost immediately I was only half listening to him, distractedly grabbing blocks and throwing them into the distance and rolling the truck across the table while Mustafa patiently demonstrated how to stack cubes.

It was only when I reached for the table tennis paddle that Mustafa suggested we stick with the block-stacking in a polite, throat-clearing sort of way. I joined in, making a stack and then trying to balance it on his stack, but I was already well past that and just wanted to get down to some VR ping pong.

Mustafa suggested I spend a few seconds just trying to bounce the table tennis ball on my paddle before starting a rally, to get used to the sensation of weightless ping pong, which required an added delicacy of touch.

Weightlessness. You might think that interacting with objects without any mass would feel odd and unsatisfactory, but in the Oculus Touch demo you come to realise that tactile experience is only one part of the overall sensory picture.

It wasn't exactly like real table tennis, but it was pretty close. Learning how to play wasn't a matter of learning the rules of some oblique videogame – I already knew, because objects in the Touch demo behaved pretty much the same as objects in the world.

Until, that is, Mustafa produced an orb and invited me to smash it with my fist. We found ourselves in outer space, the objects on the table drifting serenely upwards in front of us. I punched a few blocks and toys into the distance and then we had a round of zero gravity table tennis, which was as fun as it sounds.

Another orb turned our world into a shooting gallery, complete with laser pistols and slingshots. Another placed us underwater, fracturing Mustafa’s voice into an echoey wobble.

At one point, back in the shooting gallery, Mustafa summoned a pistol and invited me to pick it up and shoot him with it. When I told him that I felt uneasy about this he revealed that a previous guest was so uncomfortable that his hand was shaking as he aimed.

It was a shrink ray, and when I shot Mustafa he appeared in miniature and squeaky voiced on the table. A moment later he turned the gun on me, and then held a soft toy up for me to use as a punching bag.

After that he produced a sparkler and a zippo lighter, the flame of which I somehow managed to extinguish. Mustafa explained that to light it again I just had to close the lid and then flip it open with a flick of my wrist. Of course.

I used it to light a sparkler, with which I wrote my name in the air. Then Mustafa created some fireworks - in space - and I lit those too.

The word I found myself using most often to describe the experience to others later was "special".

The technology was certainly impressive, making me feel, more than any other VR device has managed to, that I had been somewhere else.

Objects behaved realistically, to the point that whenever I accidentally dropped something at my feet I instinctively crouched down to pick it up, even though Mustafa told me early on that this wasn’t possible - dropped items simply reappeared on the counter.

It would have required a serious mental effort to walk through the counter itself. As far as my brain was concerned, the counter was there.

Interacting with objects as physical entities was completely intuitive from the start, though it took me a while to get used to the controls.

Not having grasped exactly how the hand squeezing worked, I ended up mashing the triggers and the thumbsticks to make a fist, which worked for simple operations but resulted in my accidentally dropping more complex objects, such as the pistols.

And there's a wider issue with VR controllers designed to simulate the function of hands that may never be resolved: whenever you drop an object in the virtual world the object in your physical hand remains in place, creating the bizarre sensation of hands that are both empty and full.

I didn't have long enough in the Toybox to get completely accustomed to this, but in any case it wasn't a serious problem.

By the end of the demo I felt strangely close to Mustafa - both the blue outline I said goodbye to and the tall guy I met in the real world a few seconds later.

Thanks to the technology behind it, Toybox is an immersive, transporting demo. But it's enriched immeasurably by the fact that you share its world with somebody else. If you thought Journey was affecting, you ain't seen nothing yet. 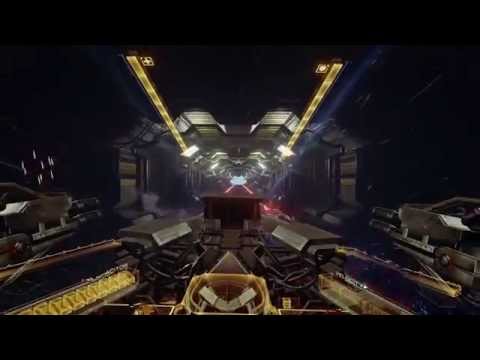 Oculus Rift is out right now in the UK