Free to play developers - don't do this 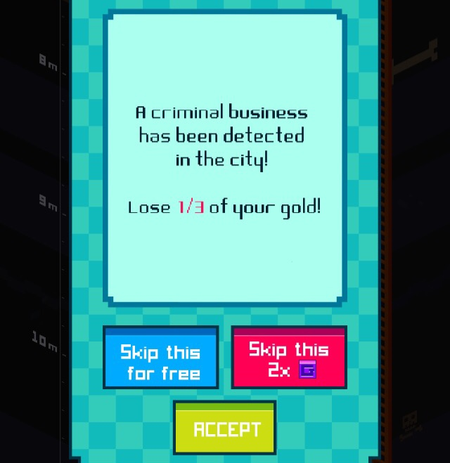 A quick announcement to the developers behind free to play games: we get it. You need to make your games a bit abrasive to encourage us to spend money. We get it.

We get grinding and energy systems and difficulty spikes that weed out the players from the payers. We get random rolls and gold mines that can only hold so much gold. We accept all that.

But a new game called Century City - another brainless screen tapper - took it to a new level.

I found a little roulette wheel, and the outcome wasn't good. "A criminal business has been detected in the city," it said. I had lost a third of my gold. Gold I had spent ages accruing by tapping on the screen like a frantic idiot.

I could accept that and give up several million coins. Or I could reverse the outcome and get my money back by paying a little premium currency, or by watching a video advert.

It's not a huge price to pay. Only two gems when I have eighteen, or a 30 second video advert. But being forced to do either, lest I immediately lose hours of progress? Uncool, guys. Uncool.

There are ethical ways to do free to play, and unethical ways. The tricks Century City pulls - like holding your progress hostage unless you pay up - fall firmly in the latter category.

Thanks to Mike Rose for the tip

Honey Heroes is a game about filling up a bear

Once you start playing Century City it's hard to put it down, out on iOS next week