No I don't understand those words either

Super Evil Megacorp's Vainglory - that spiffy-looking mobile MOBA that was shown off during Apple's iPhone 6 keynote - is now available to download in Europe.

This is a fast-paced three-on-three multiplayer battler that has you fighting to destroy the enemy's crystal, while simultaneously defending your own. You've got loads of heroes to choose from, who all have unique powers and items.

It's obviously inspired by DOTA 2 and League Of Legends, but it has some interesting ideas of its own, like a hulking great Kraken creature that spawns in the middle of the map at the 15 minute mark and helps out whichever team can tame it. 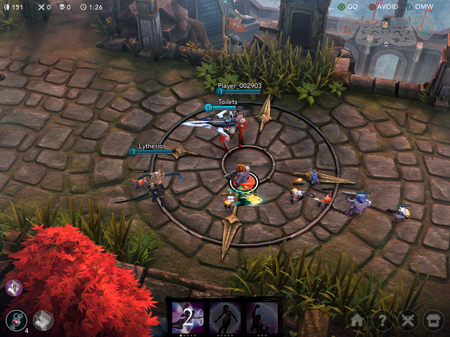 Vainglory comes in two flavours. The iPad edition is compatible with the Retina iPad mini or iPad 2 and up, while the iPhone version needs an iPhone 5S or better. If you've got a new device you'll be treated to 60 frames per second gameplay.

This European launch is part of Vainglory's slow global rollout. It will be available in North America, South America, the Middle East, and Africa on November 18th, and China, Japan, and Korea sometime later.