Twine me a river

It was easy to gloss over the rest of Sony's press conference after the words "Grim Fandango" left Adam Boyes' lips - but there was another intriguing title for the Vita that caught our eye.

The beautiful and serene Entwined by student start-up studio Pixel Opus tells the story of an origami fish and an origami bird who fall in love and try to come together.

Obviously, origami biology makes this impossible as fish and birds historically don't generally share the same living space - but the two souls at the heart of Etwined try their hardest to come together.

And guess what? Sometimes they do, and when that happens they turn into a flying green dragon.

After the captivating trailer shown on Monday, Entwined shot to the top of our "hands-on" wishlist - and we were happy to put it through its paces during the week.

The main gameplay challenge in Entwined comes from using your two thumbs in tandem as you finesse each of the Vita's control sticks.

On the left, you've got the orange fish while the teal bird occupies the right side of the screen.

As you fly through linear, tube-shaped levels, you'll need to slide each character around to collect orbs and fly through sequential gates. 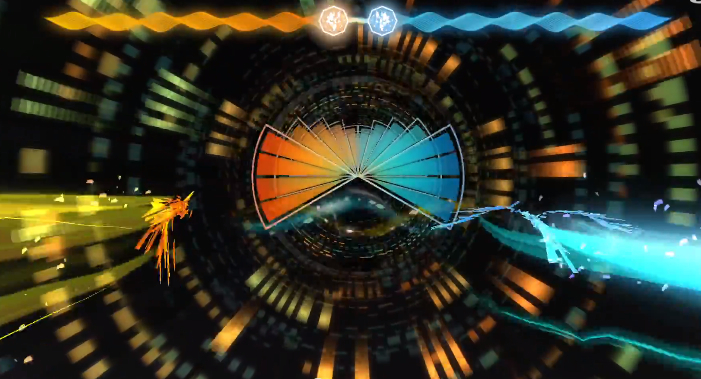 The gates are by far the most difficult part of Entwined's balancing act to manage, as they require very minor, and very precise, adjustments to clear in sequence.

Unlike the orbs - which fill up your gauge at the top of the screen - there's really no reward for clearly the gates perfectly, but your gauge will deplete if you slide out of line on the gates and botch the run.

I tried my hand at Entwined on three separate occasions and wasn't able to get anything going on the first attempt.

The demo unit (a Vita Slim)'s right joystick flew with alarming ease under the thuggish pressure of my right thumb, while my underdeveloped left thumb required much more persuasion to move the fish along.

If you're a person like me who heavily favours one hand over the other, you might experience the same early troubles I had with Entwined.

Coming back to it a day later with much more time to devote to the session, I found myself able to adapt to my right-hand dominance and soon filled the two gauges up to the point that they glowed green.

A quick tap on the L and R shoulder buttons activated something like concordance, as arcs of light shoot between the two gauges.

While this effect certainly looks cool, it's a reminder to keep doing what you're doing - clear gates, pick up orbs, and don't screw up. If you do, the concordance ends and you'll need to fill the gauges up again.

If you manage to do well during this period, however, the gauges are ultimately pulled together and merge into one.

So too are the fish and bird, who burst triumphantly out of the linear, tubular level and soar through the air as a majestic green dragon. 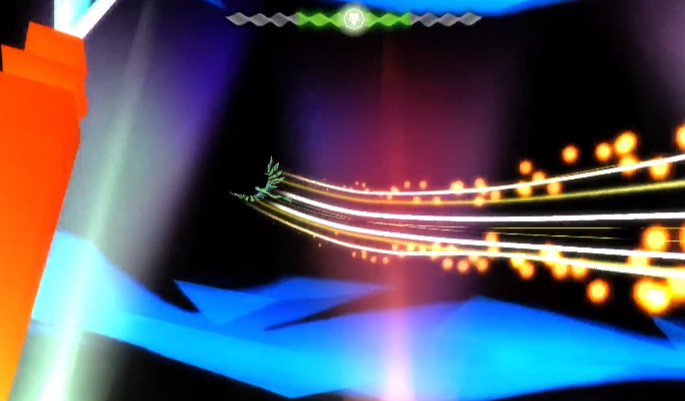 I flew around and collected a few orbs as soon as I could, and the experience felt absolutely amazing compared to the linearity of the levels that preceded it.

Unfortunately, Entwined didn't tell me what to do here, so I just flew around for a bit before my time as a dragon ended.

It's tough to say if that feeling of transcendence and freedom is enough to offset the almost endless amount of time you can spend filling the gauges to get airborn, but there's an undeniable magic to Entwined when the two animals merge together.

As I walked away from Entwined, I found myself thinking that while the twin-stick controls were nice, it really would play better on an iPad or Android tablet.

That might actually happen, interestingly enough, but even if it doesn't, Vita owners looking for a relaxed, untraditional, and meditative game experience might want to check out Etwined when it's released for the handheld.

[Update] E3 2014: Entwined is a beautiful twin-stick love story you'll be able to play on your Vita

Swim like a fish and glide like a bird in Entwined Challenge, now on iOS and Android