Samsung has announced a couple of new Galaxy Tab S devices overnight. There's an 8.4 inch model and a 10.5 inch model, but the specs on both of the tablets are pretty similar.

Both of them have 2560x1600 Super AMOLED displays with 90% AdobeRGB colour spectrum coverage. Both have Exynos 5 Octa or Snapdragon 800 processors and 3GB of RAM.

They both come in 16GB or 32GB flavours, and feature microSD card slots that mean you can expand that memory up to 128GB.

They've both got 8 megapixel rear camera and 2.1 megapixel front cameras. They both run Android 4.4 KitKat, and they both have finger print scanners. 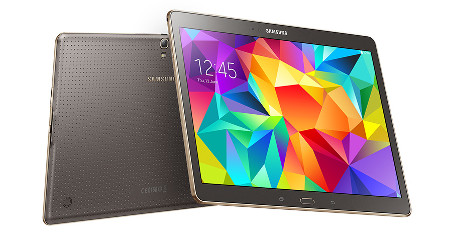 Both of the devices can connect to your Samsung phone so that calls and texts can be forwarded to your tablet, which sounds pretty interesting.

The two new Galaxy Tabs come in a couple of colours, and there's an LTE version planned as well.

We're not sure how much the devices will cost when they're launched, but the premium specs suggest they'll cost quite a bit.

The Samsung Galaxy S8 will be available April 21st, starting from £679