Out at midnight: Perfect Paths is an elegant puzzler chock-full of sophistication and simplicity

The trailer for Perfect Paths opens up with a quotation from Leonardo da Vinci. It reads: "Simplicity is the ultimate sophistication."

You're then introduced to the gameplay of this elegant puzzler. It involves drawing paths across grids to guide squares to their colour-coded destinations. Indeed, it is simple.

But Perfect Paths is the work of a studio called Hyperbolic Magnetism, which isn't exactly a name that screams 'simplicity'.

It should come as no surprise, then, to discover that the dev soon ups the intensity ante in the trailer. 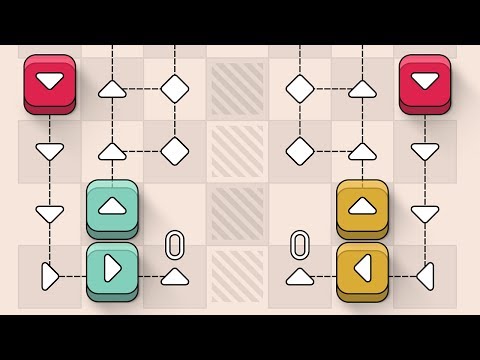 It's made clear that while Perfect Paths might start off simply enough, it certainly won't stay like that.

Its later levels seem to invite comparisons to directing traffic at a crossroads in the middle of a city during rush hour. Still, somehow it all looks so elegant as you watch all the parts move about.

As for playing it yourself, well, you'll soon be able to do just that. Perfect Paths will be available from the UK and US App Stores at around midnight, priced £1.49 / $1.99.

Out at midnight: Salt & Pepper is like Crayon Physics Deluxe with condiments

Out at midnight: Har•mo•ny 2 blends soothing music from Hammock with colourful puzzles