I really admire what Nintendo Pocket Football Club is aiming for.

It's a football management sim that eschews realism for faux-8-bit visuals, on a device that hasn't seen all too many simulation games grace its two screens.

But the footie strategy experience it provides doesn't seem deep enough to appeal to football fanatics, and it doesn't abstract the play enough to make it appeal to a wider audience, making for an awkward and unexciting eShop downloadable. 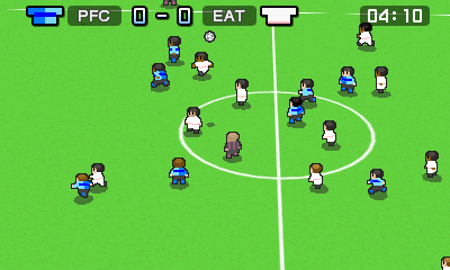 The visuals of Nintendo Pocket Football Club were what initially grabbed my attention when it was announced, and they don't disappoint. Your team, which you'll try to lead to win the (fictional) treble, is represented by 2D pixel art players on a 3D field.

There aren't loads of animations per player, but there's enough to see them jostle and fight for possession, and passing, and shooting, and so on. You can tweak your team's kit to your heart's desire too, as well as change its name and logo.

You'll need to purchase new players for your team, and train your squad using the cards you collect, which is done by your avatar noticing crucial areas of improvement during each match. It's all a bit Kunio-kun, all a bit Sensible Soccer, and that's great, because I like those games.

Staying on the "cute sim with a sense of humour" tip, Nintendo Pocket Football Club's training ranges from weights and sprinting, to oil therapy and karaoke. You can see individual comments from the crowd in cartoon speech bubbles above their heads, expressing their annoyance at conceding a goal, or celebrating a spectacular finish.

It's more likely you'll see the former, especially early on, because the game is heavily reliant on you grinding away at matches for more training cards so that you build a stronger team, because you start with one that's pretty incompetent.

The AI of your squad will make very dumb decisions if you don't train them, such as passing to another player even if they're clear on goal, or attempting sliding tackles when they're ten feet or so from the ball. 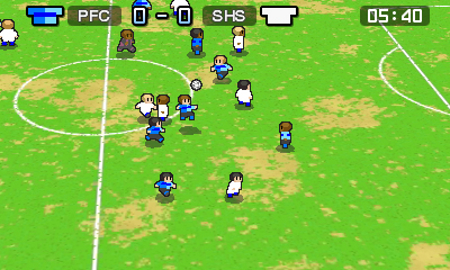 Look at the state of that turf!

But the oddities don't stop there. If you continue to screw up games, you're told the club will "lose supporters", which I'm fairly confident isn't the way it works in real life. Unless you're a Manchester United supporter, I gather.

Mid-match tactics and substitutions can be made, but otherwise there's very little interaction you can have with a game once it gets going. At most, you tend to find yourself ensuring that your player's energy levels don't drop too low, to avoid them getting injured.

You'll need to work out which training cards work best with which types of players, which cards combine to produce special cards, and which players shouldn't bother going through training as they're not at their peak in performance. This is all hit-and-miss, and you'll spend hours languishing at the bottom of the leagues because of it.

With online matches, SpotPass multiplayer, and numerous teams to defeat, you can spend plenty of time with Nintendo Pocket Football Club, even if you're not spending a whole bunch of that time actually playing it.

This charming but simple strategy game is a unique proposition then, but one that will find it hard to connect with a specific audience. Its oddities will put off the football elite, and its grind will deter the more casual fan too.

This footie sim's quirks and grind will ensure it remains a downloadable curio, but the presentation and humour is something to see
By Peter Willington
| May 9, 2014 |
3DS
Find out more about Nintendo Pocket Football Club
SEE COMMENTS

Modern Combat 5 will feature classes, unified progression, and a trip to Japan according to Gameloft