Hardcore MMOG Game of War launches on iOS; gives you the chance to be King of Kings

Peter Molyneux has been generating plenty of buzz with Godus.

That's his new god game, in which one person takes the role - and the power of - the God of the entire game world.

The first God will be a Scottish teenager called Bryan.

But Molyneux isn't the only developer experimenting with this concept.

US developer Machine Zone is taking a similar approach in its new release - city-building and battling title - Game of War.

King of Game of War

Just released for iOS, the free-to-play title is a hardcore MMOG, which relies heavily on its social alliance structure.

And that's how the 'god' element comes into play.

Each alliance has a kingdom, with a wondrous capital building, and every kingdom needs a king to ruler over it.

The king of each alliance has powers over their players in terms of setting taxes and giving individuals buff/debuffs as s/he sees fit.

Of course, in keeping with how hierarchies work, the king of each alliance also competes upwards to become the King of Kings i.e. the overall ruler of the entire game. 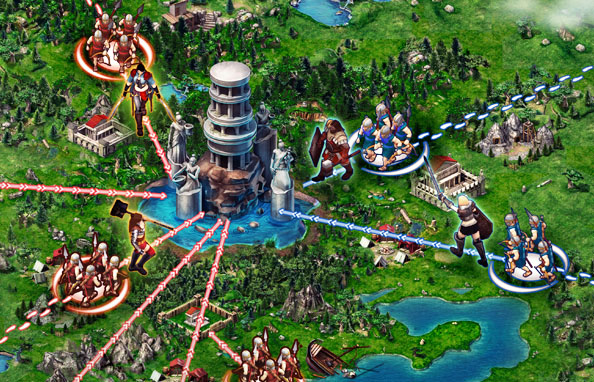 Similar to online games such as Eve Online, all the action in Game of War happens within one big, persistent world, making the King of Kings the ruler over every other player.

There is a big difference compared to Godus where the God rules for months, however.

In Game of War, the kings can be replaced every three days, ensuring lots of fast competition.

Core of the core

And more generally, hardcore PVP gameplay is something Machine Zone is very focused on.

"We're going in the opposite direction to the mid-core trend," explains CEO Gabe Leydon.

"This is a complicated game. We're trying to make it more complicated. I think players need to feel like they are mastering something," he says.

Still, if the feedback from the game's soft launch - which saw average daily gameplay per player of 2 hours spread over 10 game sessions - is anything to go by, Game of War is already finding an appreciative market.

You can check out Game of War now, which is free to download for iPhone and iPad.

The Official Pocket Gamer Guide to Badland is now live