Updated on June 13th, at 12:40: WayForward's creative director Matt Bozon has announced, via the magic of Twitter, that Shantae has been delayed until July.

On its blog, WayForward has revealed that its cult classic Game Boy Color adventure Shantae will be given a new home on the 3DS Virtual Console on June 20th.

The game stars a half-genie belly dancer who's charged with protecting Scuttle Town. So, when lady pirate Risky Boots attacks the town and nicks a prototype steam engine, Shantae must give chase.

The purple-haired Guardian Genie can bust out a magical jig and transform into a monkey, elephant, spider, or harpy. These give her new attacks, and help Shantae explore the Metroidvania world of Sequin Land.

The game was much loved at launch, but it was doomed to obscurity. Shantae was released in shops almost a year after the Game Boy Advance, and was only made available in North America. 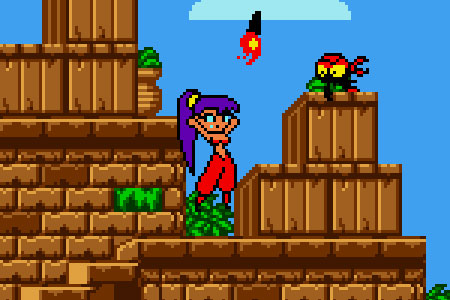 Now, everyone will get a chance to try it.

The game will be released on the 3DS eShop in North America, Europe, Australia, and New Zealand on June 20th. No price has been confirmed for the game, but GBC titles tend to cost £4.49 on Virtual Console.

Shantae was followed by a sequel, Risky's Revenge, on DSiWare and iOS. A third game, Shantae and the Pirate's Curse, is due out later this year.

Minions cause mayhem in this Despicable Me: Minion Rush trailer