Due out 'before too long'

When Zynga bought up November Software in November 2012, the move highlighted the free-to-play giant's new interest in mid-core gaming.

After all, as a four man start-up, November's reputation (as it was) revolved around its in-development action RPG Battlestone.

And the first screenshots of the game don't look much like FarmVille either.

According to November's CTO Szymon Swistun, Battlestone has already been released for testing in certain territories and will be released globally soon.

He says that although the game has advanced a long way from the initial concept, it still fulfills the original vision of bringing a more accessible play style to the action RPG. 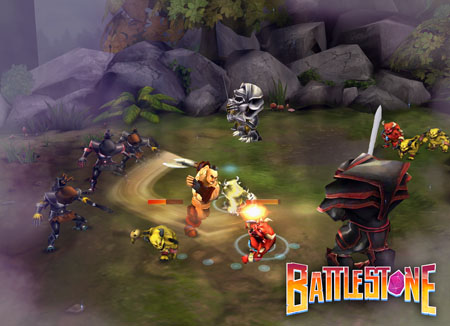 "An intuitive control system anchors the game, where players can defeat enemies and bosses with a simple swipe of the finger," he reveals.

"Selecting multiple targets strings together over-the-top attack combinations to fend off hordes of enemies. You'll also have to fend off other players thanks to the addition of guilds and weekly PVP tournaments."

Further tactical depth will be provided via the character collection system, which enables you to summon and upgrade heroes with unique abilities.

Pick up Angry Birds Star Wars free with your latte, thanks to Starbucks