Traditional point-and-click adventure The Journey Down: Chapter One out on iOS at midnight

Around this time last year, SkyGoblin informed us that it was working on the first episode of its new traditional point-and-click adventure The Journey Down.

This iPhone and iPad title was supposed to be go live on the App Store earlier this year, but it never materialised.

Your, and indeed our, wait is finally over, though: it has just landed on the New Zealand App Store. And as you know, this means it'll be available to download in the UK and US from around midnight this evening.

In the first episode of The Journey Down, you follow a gas station worker called Bwana and his sidekick Kito, as they attempt to uncover a missing journal and reveal the true fate of their long-lost father, Captain Kaonandodo. 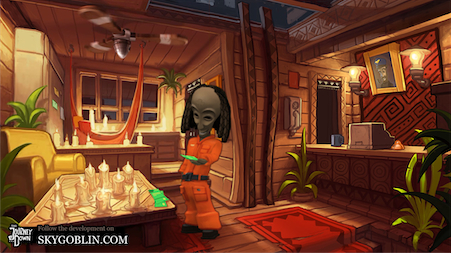 As we noted back in December 2011, this title is heavily influenced by black African culture.

There's a reggae soundtrack, for example, and the game's character and pattern designs are inspired by carvings and masks from the Makonde and Chokwe tribes.

You'll be able to grab The Journey Down: Chapter One as a Universal app from midnight this evening for 69p / 99c. Finally.