Angry Birds Star Wars is chock-full of Golden Droids, which open up bonus levels when you find and destroy them.

These can often be easy to find but difficult to actually get at.

So, follow our guide to find out how to get the Golden Droids, and beat their associated secret stages.

Thank us in the morning. 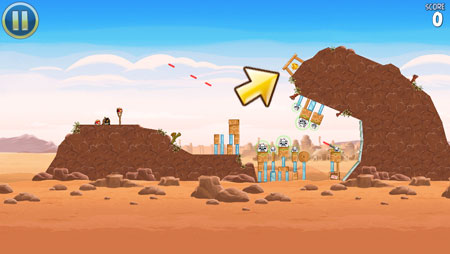 This Golden Droid is no easy nut to crack. You need to deflect one of those laser beams so it bounces towards the Droid's wooden box and breaks it out.

The Obi-Wan Bird is best for this, as you have a lot more control over where the beam is sent. So, get rid of the Like Skywalker Bird, wait for the Stormtrooper pig to fire, and then launch Obi-Wan.

Just as you get near the laser beams (which should be in mid-air, high above the left-most Stormtrooper), use force push to deflect the beam towards the Droid. Do it right, and you'll make a direct hit. If not, reload the level and try again. 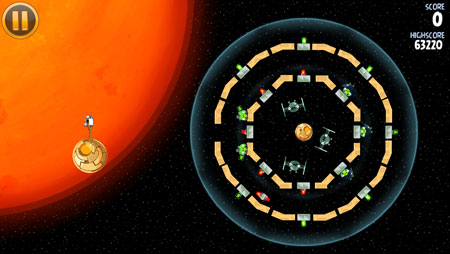 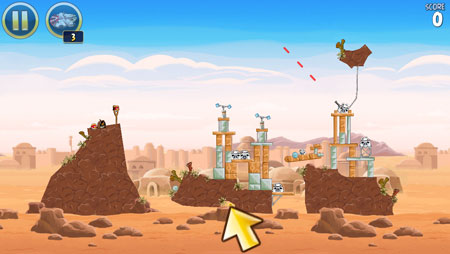 This Golden Droid is hidden beneath the level.

First off, use Luke Skywalker to destroy the small bush that's propping up the metal ball. Don't use your Lightsaber, or you'll wreck the ball in the process.

The ball should hit the floor. Now, send down Obi-Wan Kenobi, force push the ball to the right of the screen, and it will fly over and smash the Droid. Easy. 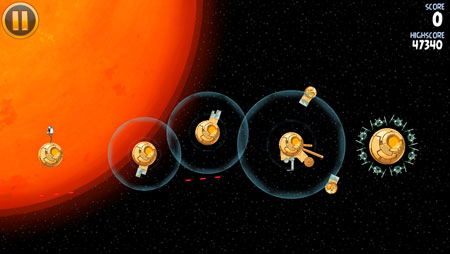 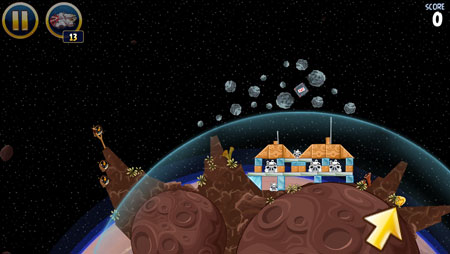 This is a hard one to crack. Using Obi-Wan's force push, you'll need to push those rocks towards the right of the screen so one gets trapped in the planet's gravity well and is dragged down into the small valley housing the Golden Droid.

Your best bet is to push the rocks right with one or two birds, then fly up high and push those space boulders towards the planet with another. 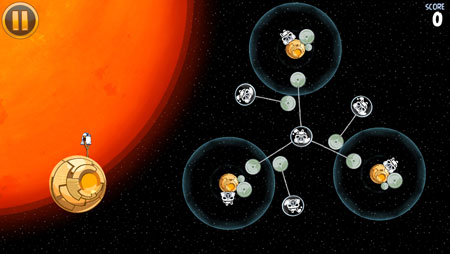 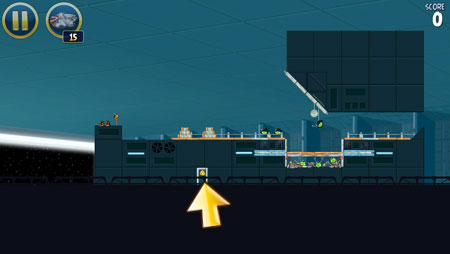 You can see this Golden Droid hiding in a little box beneath the level. To get at it, you'll need to fire your one Han Solo Bird backwards with a very high arc so that he shoots up, then drops off the left edge of the level. 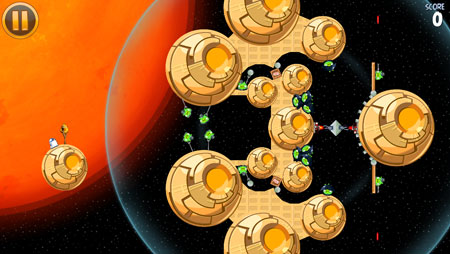 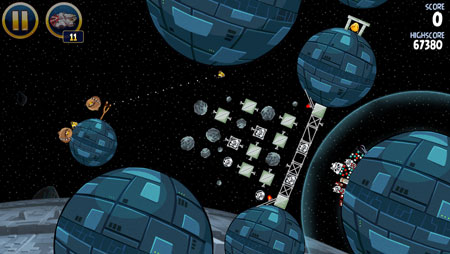 To get this Golden Droid, you need to fire a Han Solo Bird into the gap between the two top-most planets, making sure your trajectory is as close as possible to the left planet without hitting it.

At the exact moment you slam into the planet on the right, tap on the egg and Solo will fire a few shots - the latter one or two will hit the metal enclosure. Then, throw away the Chewbacca Bird, and do the same as above with the next Han Solo Bird to secure the Droid. 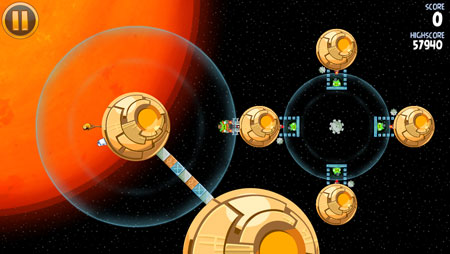 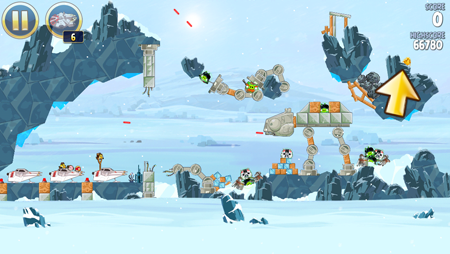 This Golden Droid is one tough son of a gun. It's hidden completely out of reach, and you'll need to be a crack shot with Han's laser to reach it.

First up, send your first Han up in the air, and shoot through the pig holding up the bridge, and into the the arc structure in the top right of the battlefield. Get it right and the bridge will fall, and the arc will be damaged (the wood will disintegrate, the metal will crack but not break).

Then, waste your Luke Bird. You can use the Leia Bird's gravity power to tug away any loose material from the arc.

Finally, send up your final Han and shoot the top-right part of the arc. All being well, a laser beam will rip through the left column, bounce off the top, soar through the wood, and hit the Droid. You'll need a few goes. Watch the demonstration in the video below if you get stuck. 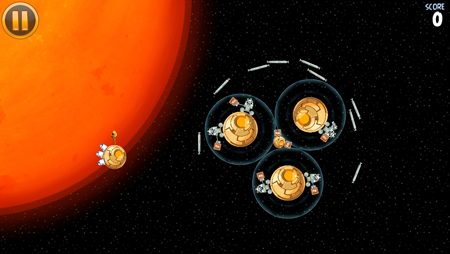 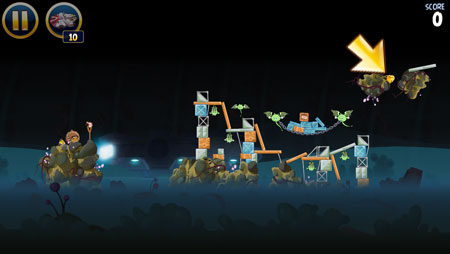 This Golden Droid requires Han and Leia to work together. Zoom out and you'll see the droid on a rock to the right of the battlefield. It's sitting next to a metal rod.

First, fire Leia high into the air and tap on the rod to snag it with your tractor beam. All being well, the metal pole will stand up straight and stay there. Then, waste Chewie and fire Han up into the air.

Tap on the lower quadrant of the metal rod and Han's laser beam should hit the metal, bounce backwards, and strike the droid. 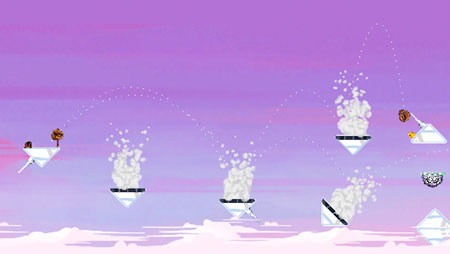 This one is a right pain. It's easy to spot - it's sitting on a little ledge midway between the birds and the pigs. But the nuisance air vents and nearby tower make it very tricky to actually get at.

So, here's the trick: fire the Chewie bird high above the first vent so that it dives down into the second. It will bounce up into the top vent, and hopefully arc up high and fall down onto the droid.

If not, use the trajectory line from the previous bird to slightly tweak your shot either higher or lower until you hit the droid. 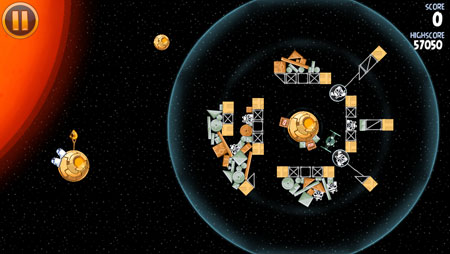 Any easy bonus level now. Detonate the C3-P0 bird near one of the TNT crates to take out most of the pigs, then pick off the remaining storm troopers with the R2-D2 birds. 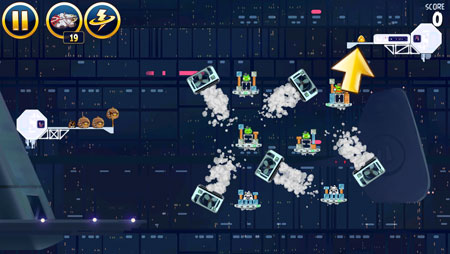 No prizes for guessing how you reach this far-off droid. You're obviously going to need to use one of the steam vents to propel a bird across the level.

That's easier said than done, though. First, fire a chewie bird up high so he drops down on the top-left fan and hopefully spins it around so it fires vertically.

Then, fire another bird into the steam to push your feathered friend into the air and - fingers crossed - into the droid.

Here's a video to show you how it's done. 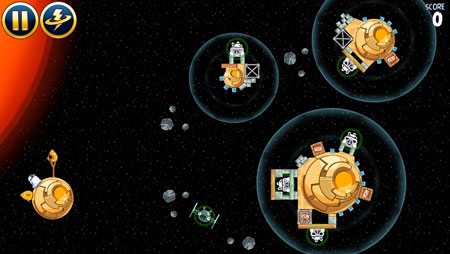 This Droid is not too difficult to get. Use the Obi-Wan Bird to force push the big purple log up into the left-most pig, which should destroy his little wooden hut in the process.

Then, fire the yellow Han Bird into the air, and shoot your laser at the Droid. If the wooden structure was knocked down, you'll hit the Droid with ease.

Watch the video above to see how it's done, and to see how to finish bonus level D–10.