Here's some sad news for fans of stories where birds are intergalactic heroes. None of the Star Wars video games are canon any more.

That means your dreams of a JJ Abrams-directed Episode VII starring Red Bird are all but dead in the water. It's a tragedy, I know.

It also means that any stories you've concocted in Tiny Death Star are, unfortunately, not true. I mean true here in the sense that they're not an official part of a made up story, but you get the idea.

There are no sleeping quarters full of people who work in the gift shop on the Death Star, and we're going to have to deal with that together.

The great, thrusting narrative of Star Wars Pinball is no longer part of the universe we all know and tolerate. All those balls are now lost like tears in rain. Or is that a different film? 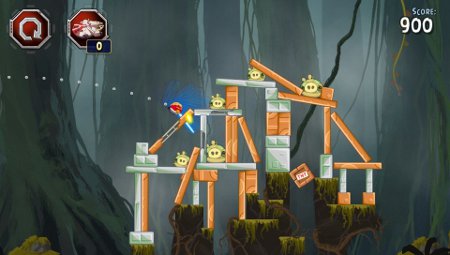 Did this even happen? I don't know any more

Where does this leave Lego Star Wars? I mean, some of that actually happened in the films, albeit not in Lego form.

Does that mean it didn't happen in the films? Will my DVDs have been irrevocably altered by this stark announcement? And I'm pretty sure there was a Lego Star Wars movie. The ramifications are frankly mind boggling.

If, like me, you're not entirely sure who you are any more, take heart. After all, they can never take our memories away. Unless they can.