Kick! Punch! It's all in the mind

It's essentially a coin-op brawler by way of auto-run platformer. It's Jetpack Joyride-meets-Double Dragon, with a twisted sense of humour and more hats than Bartholomew Cubbins.

But, it's also rock hard. You'll get zapped by jellyfish, turned into a gnome, stung by bees, smashed by orcs, and smushed by zombies. Racing up the leaderboards is no walk in the park.

So, we've called in a favour. Kepa Auwae is the owner of RocketCat Games, and he knows more about Punch Quest than anyone. We asked him for some killer tips - and here's what he gave us.

Not sure which power skills and super moves to choose before going on a punch quest? The crypt keeper of the Lootatorium, Kepa Auwae, offers his suggestions. 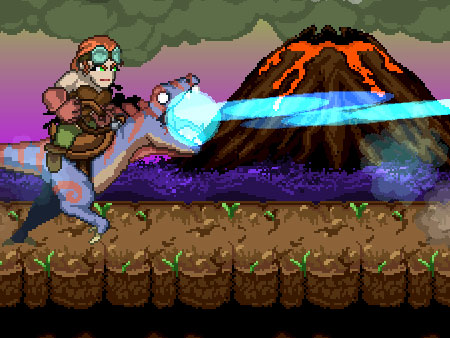 Auwae says this is a "great early loadout".

"Ki Blast will let you reflect enemy projectiles - doing this instantly won't break your combo like blocking will."

"Power Slam makes your mid-air slam punches (tap with left thumb when in the air) generate shockwaves when used on an airborne enemy. These shockwaves can defeat dangerous enemies on the ground."

"Deadsplosion causes defeated enemies to explode when they hit another enemy, and mixes in an interesting way with Power Slam."

This is the designer's "favourite loadout".

Hungry Man makes food more likely to spawn - this "can save you sometimes".

"Reflecto makes the tricky Master Wraiths much less of a problem. Exploding Fist provides great defence by letting you sometimes [take out] tough enemies from explosions you trigger by hitting weaker enemies or torches."

This loadout is only for daring "risk takers".

"Husk Musk makes more monsters appear than normal, but these higher combo opportunities may come at the cost of making things more dangerous."

"Hyper Fighting also means high combo potential, while being risky. Used together, you're probably going to get killed, though you'll cause a lot of destruction before you do."

"Shieldbreaker is so you just bust right through any orc, porc, or blorc that tries to stop you."

This barmy loadout "lets you fly around".

"Flying Fist, when Hyper Fighting is on, lets you fly over any really troublesome area. Disco Dunk makes you temporarily invulnerable if you use a slam punch to get back on the ground." Hyper Fighting makes you punch much faster.

Auwae says that Shodukin' is another good super move, as it is "the only real ranged attack in a game about melee attacks", and Ki Chain is a useful Power II skill because it "causes a lot of damage to tightly packed groups". 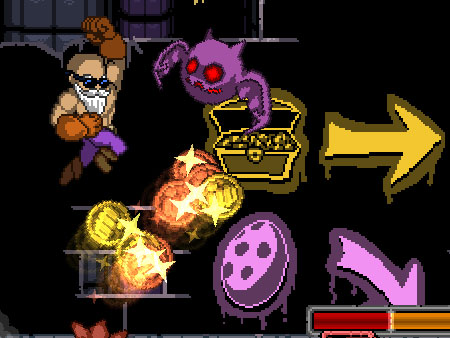 "Get good at stringing together big combos. Your combo time is extended by hitting an enemy, or keeping an enemy in the air. Try launching enemies up high with uppercuts or slam punches followed closely by a good dash punch to send them flying."

"The combo point multiplier caps at 30 hits. This means that two 45-hit combos, three 30-hit combos, or one big 90-hit combo all yield the same amount of points. The difference is that more difficult enemies show up as you get points, and you don't get points until your combo ends. So, really huge combos can prevent monster difficulty from catching up to you until the combo ends."

"Blocking and generally being careful results in your gaining smaller combos. Getting hit, even if you're blocking, will break your combo. Try avoiding blocking as much as you can - only block in situations where you think you can't avoid being hit."

"The Ultramove upgrades are really nice. Try to get them early."

"You can trick the Ancient Skeletons (the red-sparking smart ones) into jumping by jumping early, then dash punching to run under them as they're jumping. Or do that but uppercut them while you're below them. With practice, you can also slam punch them if you're both in the air, right before their spear hits you."

"You can punch an orc's shield out of the way temporarily by uppercutting it. Or you can just smash the orc's head from above using a slam punch."

"Keep practising! You can improve your score a lot by getting used to the different enemies, and learning which enemies you should handle first when the fighting gets really hectic."

List of iPhone, iPad, and Android games compatible with the SteelSeries Free controller