History in the making

Pocket Gamer recently got the chance to be plugged into the Animus and transported back to 1586: the setting for historically-inspired mobile title Assassin's Creed Utopia.

The result of a partnership between Ubisoft and social platform GREE, this latest addition to the Assassin's Creed franchise is something of a genre chimera: a blending of city building, resource management, and turn-based combat.

It's pegged as an "introduction" to the story of the much anticipated Assassin's Creed III, and Utopia follows a band of Europeans sailing to Roanoke Island to establish a New World colony.

Naturally, there are a couple of assassins stowed away on board the ship, giving us the chance to jack into the secret guild's 150 year-long colonizing effort via the all-new mobile Animus VR machine.

As the game is currently in pre-alpha (official testing is due to begin later this year) we were treated to a guided demo which shone first light on the mechanics of the game - with particular focus on the combat system. 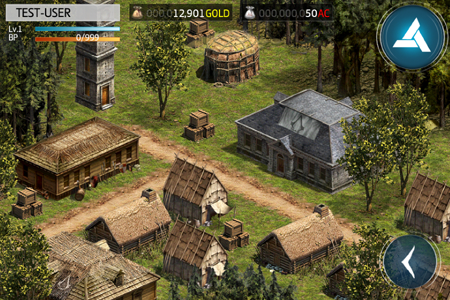 We were first given a (very) brief glimpse of the city-building mode in action. We saw a mixture of period-inspired American and European architecture slotted into an isometric layout. This mode will be immediately familiar to Sid Meier devotees (or Farmville fans, for that matter).

Of course, you won't be building in a vacuum. Your settlement will be constantly under threat, both from AI adversaries, and - thanks to an asynchronous multiplayer component - actual human aggressors.

It is this battle system which will supposedly draw in the hardcore crowd, combining turn-based combat with 3D visuals and a strong strategic slant. 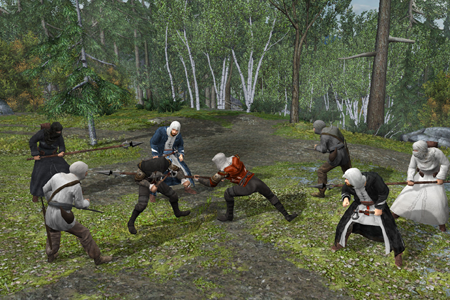 A projected white grid flashes onto the screen as the Animus loads up the battle. When the field is revealed, we see a pair of friendly guild members facing off against some less-than-friendly-looking hooded fellows.

We are told that players can choose where to place their fighters in order to gain the strategic advantage. When commands are being issued, a grid is superimposed over the battlefield to demonstrate the range of a particular weapon, or the viability of a particular target.

It is this section of the game which most clearly nods to Utopia's console ancestry - in the visual department, anyway.

Though the 3D graphics were fairly rudimentary (pre-alpha, remember), the swishing robes, swinging blades, and multiple enemies helped to remind us that we were looking at an Assassin's Creed game after all.

In functional terms, however, the combat itself has more in common with Final Fantasy than AC: Brotherhood. It's a fairly streamlined system, which offers players three basic choices.

If you select 'Guard', you will enter a defensive mode. Hit 'Attack', and your soldiers will try to get some crimson on their blades. Or, if that sounds a bit too strenuous for your weary, text-message-typing fingers, you can tap 'Auto' and let the A.I. do the fighting for you. 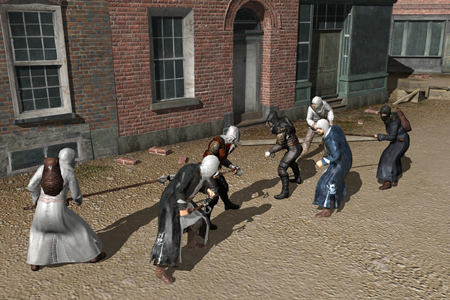 When it comes to multiplayer scuffles you'll be able to lock swords with iOS and Android players alike, thanks to the inclusion of cross-platform play over GREE. You can also recruit human allies to help eliminate particularly brutish enemies in "limited time epic battles".

There will be over 100 available characters to help bolster your ranks, some which can be bought through in-app purchases.

Extra characters are not the only cash-reliant features. Though the game itself will be free-to-play (and allegedly free from cooldowns and energy systems and the like) you can purchase items, and speed-up your building progress if you're prepared to drop some real world coin into the game.

With the enemies vanquished and the demo at an end, we were promised a complex storyline based on actual historical events, and a new, socially-slanted take on the Assassin's Creed formula. We'll have to wait until winter 2012 before we put those claims to the test.

Ubisoft reveals all on Assassin's Creed Utopia: a freemium city-building game for iOS and Android