Patents are tricky things. On one hand they're a smart move, letting bold new innovators take cash and credit for their groundbreaking ideas. They stamp out direct clones and stop your competitors from swiping your smartest inventions.

But they can also stifle and strangle creativity, putting a legal chokehold on the coolest concepts, mechanics, and ideas. In this article, you'll see both hardware design and gameplay ideas - including modes, features, and scoring systems - locked down by patents.

Imagine how differently the games industry would be if id Software had patented the first-person shooter, or if Mario-maker Shigeru Miyamoto had patented jumping (something he considered during the NES days).

As Lodsys continues its legal barrage against iPhone developers that use in-app purchases (including simulation game Pocket God), we've collected five different gaming patents that you probably didn't know existed, and explain how they've changed the way games, controllers, and handhelds are designed. 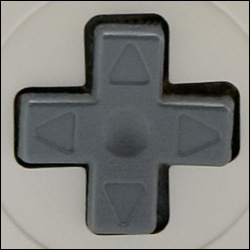 Have you ever wondered why no one's copied Nintendo's iconic cross-shaped D-pad?

That simple geometric controller has appeared on every Nintendo handheld and controller from the Game & Watch to this year's 3DS, but no other platform has ever dared follow suit.

Go look at your other devices, and tell us we're wrong. The Game Gear's D-pad is stuck in an awkward circular rocker, PlayStation pads use four shield-like bloblets for directions, and the Xbox 360's dodgy D-pad doesn't bear thinking about.

So, what's the deal?

Well, firms like Sony and Sega didn't think they had a better design: they just couldn't use the cross shape because Nintendo had patented it. The House of Mario's 1983 patent for a "multi-directional switch" says, "the character moving switch is formed in the shape of a cross."

Those inelegant square and circular pads were just creative ways for rivals to skirt around Nintendo's legal lockdown. As for the Dreamcast, it managed to circumvent the problem with a complicated fulcrum system beneath the cross, making it sufficiently different to pass by unnoticed.

The patent expired in 2005, just as Microsoft was launching its ill-advised controller. Who knows whether upcoming systems will leap to the cross-shaped D-pad now that it's fair game. The NGP, for one, won't be using it. 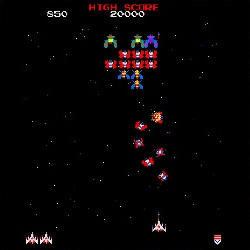 Guess what: you could be playing Pong while your PS3 games dump their massive multi-gig installs onto the hard drive, or completing a Soduku while the next Portal level loads.

In its patent, "Recording medium, method of loading games program code means, and games machine," the developer behind Pac-Man and Galaga legally locked down the idea of loading a smaller game to play while the main event is loading in the background.

So, while you can certainly play mini games while Namco-developed games load up (like Galaga in Tekken, or StarBlade in Tekken 5), you won't be able to repeat that trick on any other title. Which sucks, because some 3DS games take a long time to load.

Frustratingly enough, one of the 3DS games with the most excruciatingly long loading times is Ridge Racer 3D... by Namco! The company didn't even make use of its own patents to cut down on brain-melting load screens. 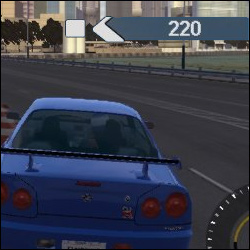 Getting though a game with style

This Microsoft-owned patent is about passing a level with panache.

In "Scoring based upon goals achieved and subjective elements", players can earn bonus points for being skillful and stylish in their movements, and by "sliding, spinning, jumping, blocking an opponent, passing an opponent, and avoiding obstacles".

While Microsoft patented this in 2001 to keep a firm grasp on Project Gotham Racing's Kudos system (which gives you points for sweet spins and nice drifts), the game maker hasn't enforced it too heavily.

You'll earn bonus points for breakdancing moves in NBA Street Homecourt, for example, and in every Tony Hawk title you can net extra points for performing random kickflips and manuals during your event. 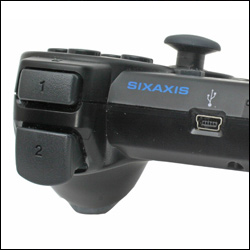 Forget about cross-shaped D-pads. Making a video game controller of any kind can be seriously tricky business, and using modern technology like wireless connectivity, rumble motors, and motion sensors can land you in major legal trouble.

Both Sony and Microsoft have shelled out millions upon millions of dollars to haptic technology company Immersion because of the rumbling motors inside Xbox and PlayStation pads (Nintendo uses a different design and got away scot-free, this time). Microsoft settled out of court, but Sony went on fighting.

It has never been confirmed, but it's widely speculated that the PS3's Sixaxis pad lacked rumble technology due to this sticky legal spat. Once the two companies reached an agreement (and Sony paid up nearly $100 million), the DualShock 3, complete with rumble support, appeared. Coincidence? Hmmmm.

In 2006, Nintendo and Microsoft were found to be infringing 12 different patents relating to things like force feedback and analogue sensor technology in Xbox, GameCube, and Wii controllers. Nintendo paid Anascaope $21 million, while Microsoft settled out of court for an undisclosed amount.

In 2008, Rockville start up Hillcrest Labs argued that the motion-sensitive Wii remote infringed its patents. Once again, Nintendo paid up to avoid having the Nintendo Wii banned in North America. 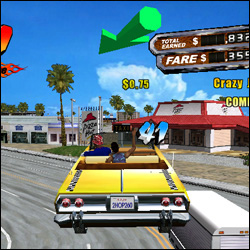 Floating arrow in a driving game

Believe it or not, but only Sega can put giant floating arrows in racing games. The massive green pointer in hectic cab sim Crazy Taxi seemed like such a smart idea that the Dreamcast developer filed it as a patent.

And the studio was serious: when cartoon open world game Simpsons: Hit and Run employed a similar system, Sega called in the lawyers.

Sega sued Fox Entertainment, EA, and Radical Games, and the case was settled out of court for an undisclosed amount.

This is more than likely the reason that you're stuck with GPS-style map screens in Grand Theft Auto, and the incredibly awkward indicator lights in PS2 crime sim The Getaway. But hey, at least you know how to get to Pizza Hut in a hurry!

What are the best free-to-play games on mobile?

5 smartphone games that are just asking for some PETA rage

Top 5 iOS and Android games to play when it snows