Welcome to Angry Birds Rio, Rovio and Fox Searchlight’s movie mash-up promo-game for iPhone, iPod touch, and iPad. This time around the pigs are gone, either replaced with cheeky, conniving primates or feathered friends that you need to rescue.

But other than that, the game is little more than a little more. There’s a handful of new stages, secrets, and structures for you to explore, unlock, and destroy. And, as ever, Pocket Gamer is here with the definitive Angry Birds Rio walkthrough, providing hints, tips, and strategies.

Your job, on every single godforsaken stage, is to catapult a gang of kamikaze birds at the rickety wooden structures on the right of the screen to either kill the monkeys or rescue the birds (by slamming into their cages).

It’s all about harnessing the game’s realistic physics system to make wood splinter, glass smash, structures topple, and poorly designed tenements fall like houses of cards. Your best bet on each stage is to exploit weak spots and heavy load areas to make the levels fall in on themselves.

Remember: some materials are sturdier than others. It's no use fruitlessly bashing away at a stone wall (especially because it takes about three direct hits to finally smash one) when you could focus on the easily destructible wooden platform that's holding it up.

But while simply killing all the monkeys or saving all the birds will unlock the next level, if you want to get the maximum three stars on each stage you'll need to aim for some high scores.

Getting a high score in Angry Birds Rio requires you to juggle deadly efficiency - unused birds net you an automatic 10,000 points each - and unrelenting damage - smashed objects give off small, but quickly accumulated points.

Pinch and zoom to see the entire battlefield on one screen, so you can quickly see how far away your catapult is from the targets, and spy any helpful objects that were hiding off-screen.

You don't always have to attack from left to right: if you aim the bird high enough you can attack from above. Perfect for levels with fortified walls but exposed roofs.

Use bouncy objects - rubber rings in the warehouse and mushrooms in the jungle - to get some extra speed or reach difficult places.

Attack TNT boxes whenever possible. These explosive boxes of boom will make entire sections of the level crumple in on itself.

Red
Unlocked: From the beginning

These plain old projectile birds are the archetypal mascot, but they’re a bit wimpy and useless. They won't do anything when tapped, and they aren’t very tough either.

These scattershot birds dissipate into three small projectiles when the screen is tapped.

Think of these little guys like a shotgun. You can make them separate early to hit a good range of targets, but ideally you want to release these fellows close to the target so all three birds will smash into a small area at once.

That's how you inflict the most damage, and can wreck a sturdy wall with a single shot.

These kamikaze birds rocket at super speeds when you tap the screen.

Despite their greatly increased velocity, they still won't do much damage on materials like stone and glass. They rip through wood like it's wet paper, though, allowing you to quickly attack enemies buried deep within a structure. 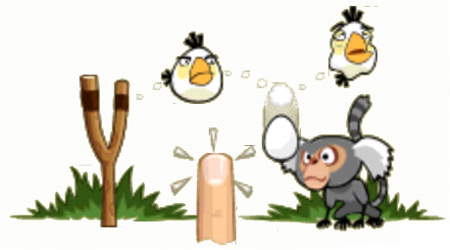 These are Egg dropping, maternal birds. Tap the screen to launch an explosive egg from your backside, before firing your now deflated friend into the stratosphere. Get as low to the target as possible for maximum splash damage.

Don't forget: these enemies can still be used as classic red-styled birds if you don't tap. Useful if you just need a boring old projectile to finish the job. 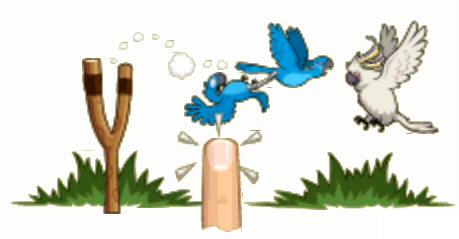 These long-necked pals are ripped directly from the movie, and turn up in time to play World 4’s last stage, and finish off the game’s first boss. You'll get to use Jewel, on his own, in World 5 and beyond.

Tap the screen to make these birds dart in a straight horizontal line. On that final stage, you can either use their mighty power to slam into the boss bird, or hit the back wall to drop down and detonate the TNT box. 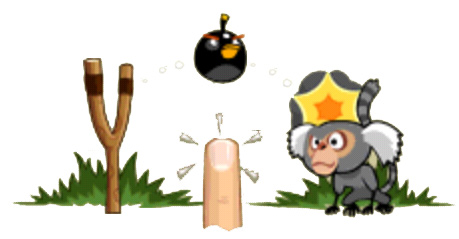 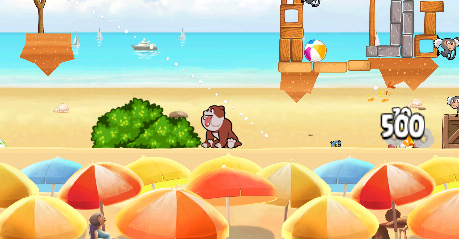 This cheeky canine isn't a bird (you don't need to be an ornithologist to figure that out), and you don't fire him from a slingshot. But he does come to your aid on the last level of Beach Volley.

Luiz the bulldog is hiding in the bush below the stage. Bounce the beach ball into the foliage with a bird to lure him out. He'll run backwards and forwards, killing any nuisance monkeys. 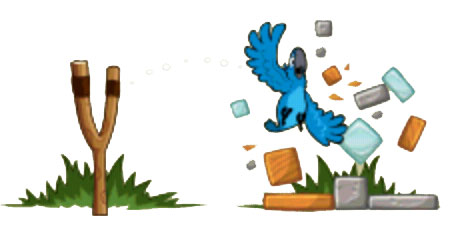 This overly active flapper will go a little mad upon impact. He'll flap his wings back and forth like crazy, causing untold carnage for a few seconds. You can unleash his attack early by tapping the screen. 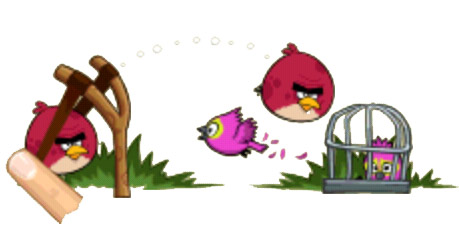 This pot bellied evolution of the classic red starter rips through wood and glass like butter, and can take out concrete without too much bother either.

He has the destructive power of the black bomb bird, just without the explosive finale. His giant size makes it tough to squeeze into tight corners, but he can wipe out entire structures just by barrelling into the bottom foundations. 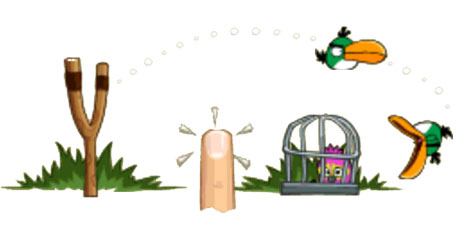 This new bird was actually introduced in Angry Birds Seasons, but has since made his way to Rio. He looks like a scrawny little chap when he's sat in the catapult, but one tap of the screen unleashes his true power.

Stuck on a specific level? Don’t waste your time - let these videos, made by Angry Birds Rio fanatics, show you how it's done. Each video will guide you through an individual stage, and explain which blocks you need to hit to finish the stage.

They change from theme to theme, such as golden pineapples in the warehouse, and golden watermelons on the beach. Here’s our guide to finding and saving every single last one of them.

Hit RPG The Bard's Tale coming to iPad next week