Given the sheer volume of hype that was floating around as 2008 drew to a close you would have been forgiven for thinking that ’09 was set to be the year of the open source handheld.

The Pandora - produced by a dedicated group of enthusiasts - was expected at the break of the year, as was Gamepark Holdings’s Wiz, the successor to the popular GP2X.

However, as 2009 rolled by both of these machines were conspicuous by their absence, but while the Pandora team continue to work on their wonder machine the Wiz has at long last become solid reality.

First impressions of the new console are incredibly favourable. It’s smaller than the GP2X, and is only moderately bigger than Nintendo’s famously dinky Game Boy Micro. The 2.8 inch screen is smaller than the 3.5 inch version seen on the GP2X, but it uses OLED technology which gives an excellent picture with an impressive viewing angle: no matter how you hold the machine, the image on the screen is always visible.

Control has always been a bone of contention with GamePark’s products - the first version of the GP2X, known as the F100, was burdened with an unreliable micro-switched joystick originally intended for use on Sat-Nav devices. The ‘improved’ GP2X F200 opted for a four-button D-pad and, while this was better, it still irked some users.

Purists will be pleased to know that the Wiz has a proper D-pad this time, and while it’s still not quite as good as we might have hoped (it’s somewhat on the spongy side, and could do with having a solid pivot point) the difference between this machine and its precursor is substantial.

The cluster of action buttons on the right-hand side of the machine bears an uncannily resemblance to a D-pad: this is because when the machine was first designed it was going to be exactly that. It was only the protestations of the GP2X faithful - spearheaded by UK distributor Craig Rothwell - that forced GamePark to consider the design and split the D-pad into four separate buttons. 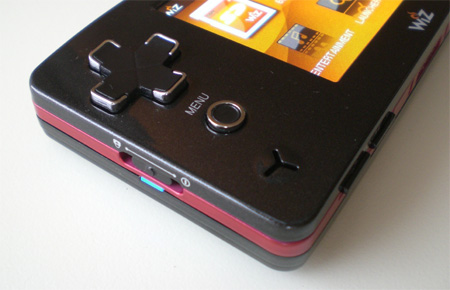 The result isn’t the complete disaster that you might expect. While it could be argued that the buttons are a little too close for comfort, using them soon becomes second nature.

Another radical change is the introduction of a rechargeable power source. The GP2X relied on AA batteries. While this was seen by a select few as a bonus as it allowed you to carry around several batteries and therefore enjoy more entertainment between charges, many owners lamented the bulky power cells, additional cost and protracted recharge times.

Thankfully the Wiz comes equipped with a 2000mAh lithium polymer power cell which grants roughly 6-7 hours of play. While this isn’t a vast improvement over the high-capacity rechargeable AA’s favoured by GP2X owners, charging via the machine itself is easier and recharge time is reduced. Also, because the Wiz’s battery is slimmer, it means the console doesn’t suffer from the ‘bulge’ profile that afflicted its forerunner.

From a purely physical standpoint then, the Wiz is a definitely step forwards. However, in terms of how it actually functions, the improvement is a little less obvious. 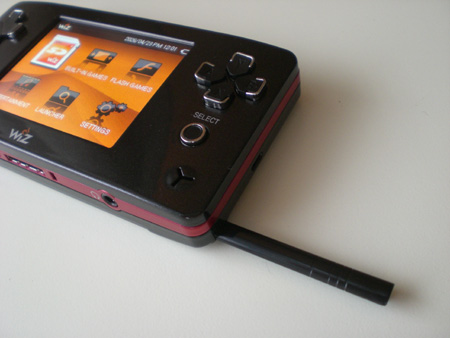 Although it sports a 533MHz ARM9 CPU, the difference in performance between the Wiz and the GP2X appears to be - for the time being at least - negligible. It runs the same emulators that were featured on its ancestor - machines such as the SNES, NES, Mega Drive, Neo Geo, Master System, Capcom CPS1/CPS2 and Amiga, amongst others.

Obviously this may change over time as industrious coders not only make their emulators faster and more effective but also push the machine to replicate other platforms.

One thing the Wiz does have in its favour is the fact that it’s been relatively easy for existing GP2X emulators (many of which have been fine-tuned over the past few years) to be ported to the new device, which means that users have a pretty wide range to choose from.

Of course, emulation is just one area in which the Wiz can be applied: it also runs homebrew software and Flash-based titles. The console comes preloaded with a selection of free games, with the highlight being Ruckage’s Zoo Keeper homage Animatch. 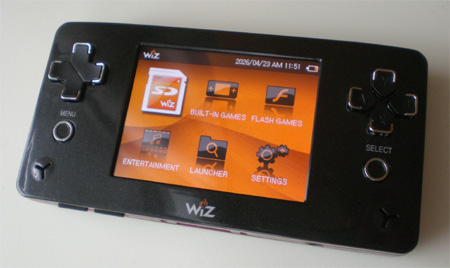 Granted, it’s a truly blatant clone, but it's incredibly addictive, and makes excellent use of the Wiz’s touchscreen - a feature that has been borrowed from the GP2X F200.

Like the GP2X before it - and practically every single open source ‘media player’ released so far - the Wiz is also capable of handling music and video. Sadly, like so many of the machines that attempt to be all things to all men, it does neither particularly well.

In fact, video playback is noticeably worse on the Wiz than it was on the GP2X - but, as always, there’s a chance that coders will release their own media player programs that eclipse the performance of those that come pre-loaded with the console.

The biggest issue with the operation of the console is unquestionably the screen - the Wiz has been cursed with a particularly troublesome ‘tearing’ display which becomes apparent during fast-moving games. Bizarrely, it manifests itself as a diagonal split, which gives the impression that the screen is actually two displays stitched together, each with a different refresh rate. 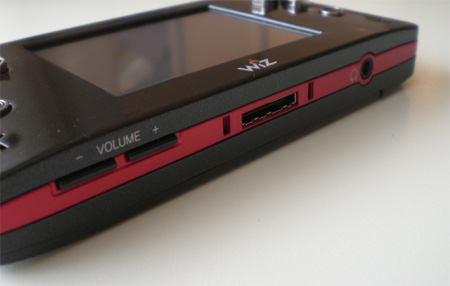 Getting a solid explanation for this problem hasn’t been easy but it appears to be something that can be solved with software. At present, a couple of the available emulators have been upgraded to lessen the tearing effect and there’s a good chance that someone will discover a cure which removes it entirely, but at the moment it’s a serious issue, although not a completely debilitating one.

While the leap in performance between the GP32 and the GP2X was considerable, the Wiz seems to be more of an enhancement than a fully fledged successor. Despite the fact that it has a smaller screen, every other aspect of the overall design points to this being a definite improvement.

Sadly, those expecting a portable device capable of effortlessly emulating the 32-bit generation of consoles is going to be bitterly disappointed: the Wiz handles the same emulators that the GP2X boasted, and at the moment it handles them only slightly better - or in some cases - exactly the same.

However, as is the case with these open source platforms, it’s almost impossible to evaluate the overall potential of the Wiz this early in the game. The CPU is capable of some impressive 3D visuals and we’ll no doubt be exposed to these in due course. Emulation is also likely to improve as coders get to grips with what is essentially a very different beast to the GP2X. 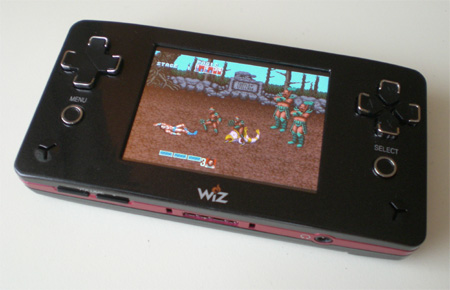 Unfortunately, the Wiz’s long-term success is resting on the performance of its rivals. The Dingoo Digital A-320 is already available and offers similar performance at half the price, and the shadow of the much-delayed Pandora - which will be the most powerful handheld gaming device on the market when it’s eventually launched this year - looms ominously over GamePark’s latest piece of hardware.

As it stands, GP2X loyalists are unlikely to be disappointed with this new machine, and if you’re new to the open source scene then you could do a lot worse than pick up a Wiz.

However, those of you looking to trade in your battered GP2X consoles for something with a little more clout, it might be prudent to stuff your wallets back in your pockets and await the coming of the Pandora.

The GamePark Wiz retails for £129.99 including postage and can be ordered from GBAX.com. The company is based in the UK and therefore you will not run the risk of incurring any costly customs charges.

While the Wiz is a marked improvement over the GP2X in terms of design, it’s less of a jump when it comes to actual performance. Things are likely to get better over time but the smart money remains firmly on the forthcoming Pandora handheld
By Damien McFerran
| Jul 20, 2009 |
SEE COMMENTS

Video footage of Gran Turismo, LittleBigPlanet appears on the PSPgo

Boom Blox could be coming to topple the iPhone