Being as most pocket gamers are internet savvy, you’re probably already familiar with the Flash animation phenomenon, Xiao Xiao.

And the little stick figure warrior’s influence is still being felt, as the number two paid app on the App Store at the of writing is StickWars, in which you defend your castle against a horde of marauding stick figures by flicking them away.

Anyway, it seems Chillingo is keen to get in on this new take on tower defence (we’ll call it castle defence, for want of a better phrase) and is publishing MoreGames Entertainment's take on this unusual but entertaining game style.

Knights Onrush features far more imaginative ways of defending your pile of posh bricks, from setting a dragon on the invaders to pounding them with Corinthian columns to chucking fireballs about the place.

Graphically, it’s a beauty (which isn’t entirely surprising considering MoreGames is the power behind the gorgeous iDracula) and looks like it’ll be immensely violent fun - in the best possible taste, of course. 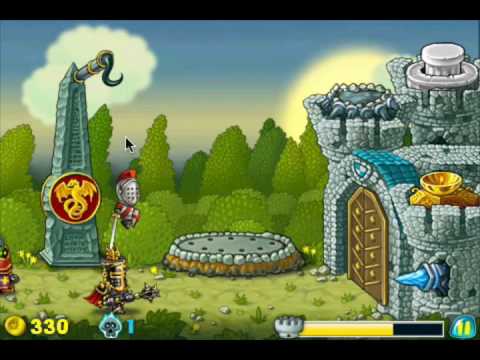 Knights Onrush 'doing a Peggle', on sale this weekend

Knights Onrush charges onto the iPhone