Further adventures in a Wilder World

Not read Part I yet? Click here to do so.

As I started walking around the town, trying to find my bearings, the one constant was the series of weeds. I picked a few, but quickly realised that this was a massive job and one that required my full attention.

The weed infestation probably hit me hardest of all, as it immediately provoked a thousand questions in my head about the inhabitants of Kusanagi and the lives of AI.

When I was not around for those five years, did the residents simply ignore the rest of the town?

Did they, for the best part of 2,000 days, look outside the windows of their homes, watch the weeds strangle the earth around them and think, "it's okay, Peter's coming back soon... he'll sort them out"?

That question was soon answered for and by me. Instead of guilt, I felt a sadness that these characters that had once been my friends - and who existed only to interact with me - had been abandoned and left to fend for themselves (which they evidently couldn't manage).

I stumbled upon the shop of The Able Sisters, and went inside. Sable, who took so long to warm to me when I first moved here, remembered me instantly.

Sable's aversion to chatting with people has clearly been cured. Her always-garrulous sister trailed me around their shop as I looked at the fashions of the town.

The Bad Religion T-shirt I'd designed all those years ago was still in stock - it seems fashion was put on standstill when I left. 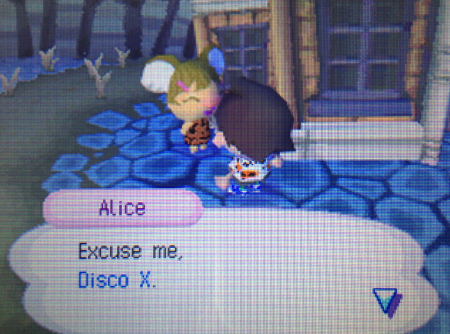 I left their store and familiarised myself with the town once again. It always was beautiful in its own way, and this layer of snow added to its quaintness.

A feeling of disconnection and disorientation overcame me. I opened my inventory to root around and figure out what I was doing last time I checked into Animal Crossing: Wild World. Right then, I noticed the town map. Laid out clearly were the names of all the residents in the town.

Alice, Queenie, Kid Cat, Boone... did I know these people once? Did I talk to them every day in the hope of continuing our fake friendship?

Some were surprised to see me when I popped into their abodes for a chat. Many exclaimed that it had been a while since we last spoke.

What we would rekindle our friendships over, it turned out, was the subject of clothes, of veggie chilli dogs, and the use of nicknames to which I no longer answered. 'Disco X' was apparently a favourite of 2006.

Weaving through the town, the landscape and paths felt familiar but foreign. I knew that the town was divided into two large land masses in the west and east, with a small island in the middle connected by two bridges. I knew my way to Tom Nook's store without even looking at a map.

I couldn't tell you how I knew how to do these things. It wasn't from memory; it was something akin to instinct. 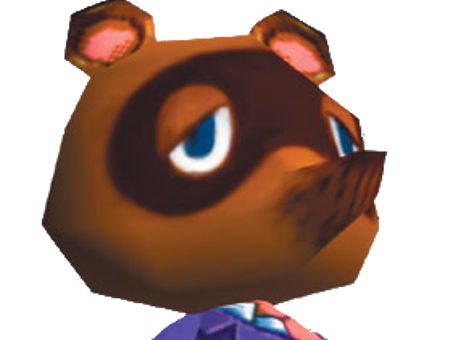 I stepped inside Nookingtons. A bit of retail therapy was in order.

However, as I scanned the various floors of the retail store, I spotted a bird in a cage chirping away and decided not to part with any Bells today. If I were to buy this little feathered chap and take him home, would I just as readily forget that he existed, too?

Before I left the store, though, I couldn't resist talking to Tom Nook. Maybe I just wanted to rub in his face the fact that I still hadn't paid my loan off after so long.

But as I engaged him in conversation, he sighed. When I prodded him further, he seemed disappointed with me. He confessed that his "real job", as he saw it, wasn't making money. Instead, it was teaching young people that life is hard and that we should all be responsible for our own actions when it comes to matters of finance.

On many levels - more levels than he could possibly know - he had failed.

I trudged back to my old house, deflated. In the sitting room, K.K. Metal was playing at top volume and cockroaches were scuttling about my instruments and Regal set of furniture.

I didn't go in any farther and instead continued upstairs. The second floor was home to a half-finished Snowman Set. K.K. Cruisin' blared out and two cupboards made out to look like snow people held hands. Again, I ignored all this.

I slid into the bed and hit the 'save' button so that I could quit and be done with this depressing jaunt around my old home.

"Come back again and see us any time," I was shortly told. Somehow, I just don't think I will.

All back to mine