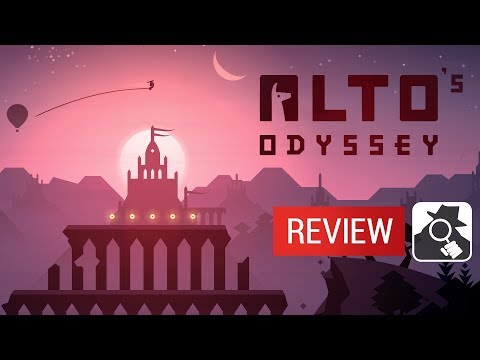 Subscribe to Pocket Gamer on
There's something playfully mesmeric about Alto's Odyssey. At its very best, when you're flowing through its dunes and ruins, there's a sense of connection that few other games on the App Store can manage to foster.

It helps that it looks so good. There's no slavish adherence here to what went before. Where the first game was bright whites and snow-capped mountains, here you're sweeping through an unforgiving desert painted in hues of deep orange and purple.

And while the core gameplay loop remains the same, there's still a beautiful thrill to everything that the game offers up. This is a game that a lot of people have been waiting for, and I'm glad to say that wait was worth it.

Once again you're playing as Alto, racing down a seemingly infinite slope on a board, pulling off tricks and collecting coins. And once again, in the main part of the game, there are challenges that you need to complete.

Rocks and chasms block your path, and you need to leap over them with a tap of the screen. Hold your finger down while you're in the air and you'll perform a backflip.

And really that's all there is to it. Alto's Odyssey is a game that doesn't rely on difficult mechanics in order to entice the player. Instead, the reward offered here is the rich world that you're sliding through. 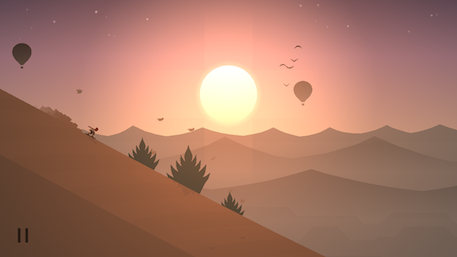 There are also boosts scattered around the slope. To begin with you'll only have magnets, which attract the coins, and lotus flowers which protect you from harm for a while. You can upgrade how long these last, as well as buying new skills that will appear as you slide.

Complete the three challenges you're set and you'll be given another three. There are plenty to complete, but if you'd prefer not to deal with them a zen mode lets you slide without the pressures of score or lives.

The random nature of the levels can sometimes lead to a little bit of frustration. One of the first challenges involves smashing a pot, and I was more than half an hour into the game before I even spotted one.

But when the world you're exploring is one of such vibrant, unique beauty, it's almost impossible to complain that you're spending too much time there.

Alto's Odyssey shows once again that simplicity doesn't need to mean simple. It shows that poise and grace are just as effective methods of engagement as noise and spectacle.

If you loved the original game, then your heart is already set on this one, as well it should be. But there's such a rich, glorious game here, that I'd happily recommend it to anyone.

A stunning looking, cathartic experience that builds subtly on what's come before. Just go and get it
Next Up :
Alien: Isolation review - "Chestbursting fun in the palm of your hand"