In a short (but oh-so-sweet) blog post, Sega announced that it will launch its dogfighting, jet-flying, blue-sky arcade game After Burner Climax on iOS.

Climax, the first new After Burner game in about a decade, was developed by Sega AM2 for arcades. You played it on an enormous sit-down arcade rig with a tilting chair and everything.

It then appeared on Xbox Live Arcade and PlayStation Network, where it grabbed a respectable 75 on Metacritic.

And now it's flying onto iPhone and iPad. There's not much to go on in Sega's blog post, but the solitary screenshot below does reveal a virtual joystick and a handful of virtual buttons. Oh, and some rather nifty graphics. 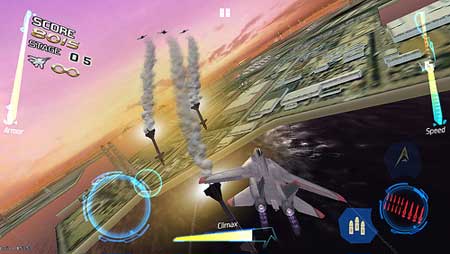 Sega says the game will be barrel rolling its way at "Mach speed" from the danger zone to your iOS device.

Basically, that means it should be out on iPhone and iPad soon.