A Snake's Tale review - A puzzler with a twist in its tail?

A Snake's Tale answers the questions we've all been asking ourselves for years now. What would happen if Snake wasn't a twitchy arcade game, and was instead a head-scratching puzzler.

Well, okay no one's been asking themselves that. But the answer that the game comes up with is actually a pretty interesting one.

This is a game that's part sliding-block puzzle, part spacial awareness test. And it's a surprising amount of fun. It may be a little rough around the edges in some places, but it's still very much worth a look.

The game sees you taking control of a snake. Your job is to guide it into a block hole. Once its head gets into the hole the rest of its body will coil down and you'll open up some new challenges.

The levels are all grid-based, and you slide a finger around to guide your slithering friend in the direction you want it to head.

Things start off pretty simply, you're just weaving around a few blocks. But it doesn't take long for things to get more interesting. 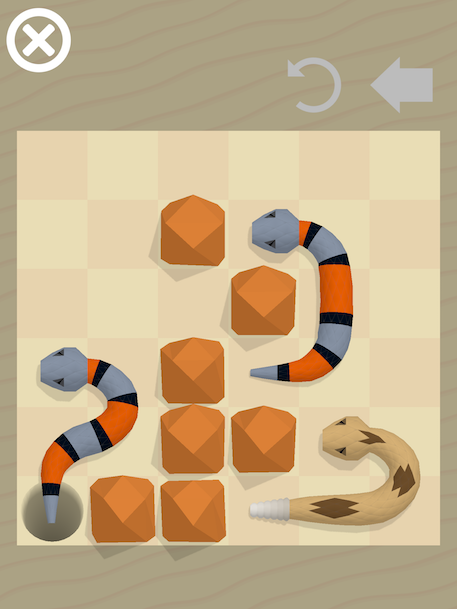 You need to move multiple snakes to get your main reptile to the exit. Or push a button to open up the hole you're trying to slither into.

Because of the size of the levels it becomes a game of careful thinking and rearranging. If you move that snake there you'll be able to squeeze past, but then what's going to happen with the second snake that's in your way?

Luckily you've got a full reset and a step back button that let you try your best to correct your mistakes. There's a gentle pace to everything here, and the game is only too happy to let you take your time with your moves.

Snakes on a plain

And it all adds together to create an interesting puzzler. Some might find it a little lightweight here and there, but there's very little hand-holding either.

It's not the best looking game on the App Store, but it's got a more-than-solid idea at its core. And it works through it in intriguing and intelligent ways.

So I guess the answer to that question is – it's actually a pretty good idea. Pick the game up and I think you might be as pleasantly surprised as I was.

A Snake's Tale review - A puzzler with a twist in its tail?

An interesting, sometimes really clever game that likes to do things differently
Next Up :
REDMAGIC 8 Pro review - "A beast in performance, but not without growing pains"

[Update] A Snake's Tale, a curious puzzler about maneuvering snakes around a board, slithers out on iOS and Android