All the tips you need to be an instant cuemaster

8 Ball Pool first hit the scene ages ago but with Version 3.7.4 out last week it's climbing back up the charts. If you're a total newbie you might be unaware of pool's rules, or you might know different rules from the ones used in 8 Ball Pool. This game's all about capitalising on your opponent’s mistakes so it's essential you learn the basics or you really don’t stand a chance.

Here's a list of the main ways you can mess up…

1. Running out of time
Every time you take a shot, you're on a timer which gets progressively faster. Your remaining time is represented as a green border that surrounds your profile picture. The border will change colour to yellow and then red as time runs out - keep watching it and squeeze in a shot before it’s too late.

2. Cue ball not hitting your own balls
Once a ball is potted without a foul, you are assigned a ball type. (The only exception is on the break, when you might pot a ball and not yet been assigned either solids or stripes.) After that, your opponent’s balls are marked with a red cross if you aim towards them. Missing your assigned ball type or hitting your opponents by mistake is always a foul.

3. Not hitting the rail
A ball has to hit the edge of the table, which is called the rail. If neither the cue ball nor a target ball hits the rail: foul. That sounds unfair but it's designed to stop negative play - it makes snookering your opponent harder to do, which keeps the pace up. Fortunately potting a ball constitutes hitting the rail too.

If you mess up, your opponent can instantly reposition the cue ball to their advantage.

Special rules for the eight-ball…

The eponymous 8 Ball needs its own section because potting it incorrectly is an instant loss.

4. Don't pot the 8 Ball until all seven your assigned balls have been potted.

5. Don't sink the cue ball and the 8 Ball on the same shot! On your final shot, after all seven coloured balls are down, potting both the eight and the cue ball signals game over (even if your opponent hasn’t holed a single ball).

7. In later stages, you have to declare the pocket you'll be aiming for with the 8 Ball. You'll lose if the 8 Ball goes into a pocket you haven't called. Don't worry about this in the first few tiers of Miniclip's game. But when you start to play for 1000 coins or more, you'll need to remember. In order to win, you must select a pocket for the 8 ball to be potted into. (Much later, when playing for really high stakes, you will have to call EVERY pocket you pot a ball into - don’t worry that problem is still miles away.)

Failing to keep to these rules can result in your opponent achieving sudden victory.

There are three ways to get a good cue. The best are unlocked as you advance in rank. 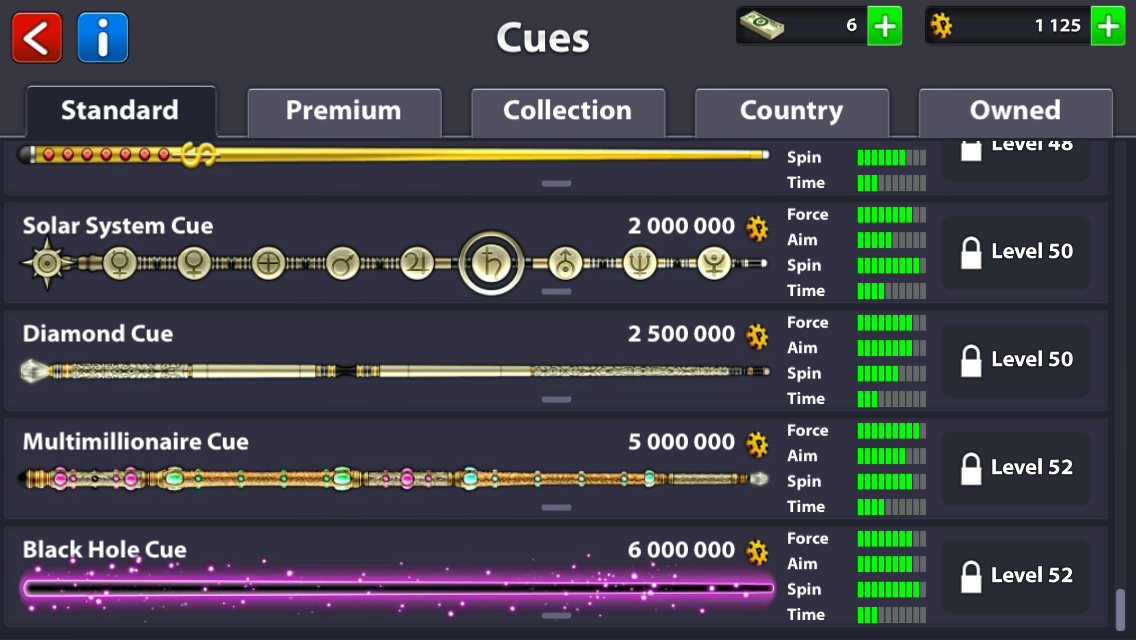 The hardest method is simply to improve your skill and win more money. You need cash to get cues and you'll have to put the time in to earn it. The quickest way to double your money is the Monaco All In Lounge, the very first table in the one-on-one category. If you have more time, a lower risk strategy is to try and win tournaments and other one-on-one games.

The second route to a badass cue is luck. Every 24 hours you'll receive a free spin of the mystery wheel, which can blag you up to around 100,000 coins, or dispense other prizes. You have a shot at a big jackpot every day, so remember to spin - it all goes towards the cues you need.

And finally, of course, you can just throw real money at the problem. Spend cash on in-game currency with which to purchase items in the store. There's nothing wrong with putting a bit of money into a free-to-play game if it helps you buy a good cue early on, we've all done it. However it's very possible to do well without actually spending a penny.

Like chess, you always want to be thinking a turn or two in advance. This is not as daunting as it sounds. If a ball is sat right in front of a pocket then odds are you can leave it there. Blocking a hole means one less goal your opponent can go for.

Practice, practice, practice. The game encourages offline play, so you can challenge a friend on the same device or against the computer. It costs 25 coins a go, nearly the same amount as a one-on-one in London. So once you have a little skill it can be financially smarter to save up and gamble in a real online game. You get 25 free coins ever hour, though, so if you need it make sure you get those practice games in.

It's possible to lock the rotation of your phone and move the screen around to see if the aiming line matches up to the hole. It might feel like cheating but it's a perfectly legit way to get a feel for how shots work. Moving the device around can help you get to grips with aiming, as the top down perspective can be misleading for newbies. It's useful when you're starting out, but remember the timer speeds up the more balls you pot, so you won't have much opportunity to dither like this. Use it until you have an instinctive feel.

How can I get coins?

3. Come back daily – every day collect your free spin.

4. Watch incentivised videos – like many free-to-play games, there are video ads you can watch, and that results in 15 coins.

5. Offers – sometimes you can sign up to promotional websites for some coins.

6. Send/receive coins – you can send packages of free coins to your friends and hope they reciprocate!

7. Buy them - if you can’t be bothered to grind, just indulge in an in-app purchase.

Getting cash is a lot trickier

That only leaves two ways to make cash, there's no shortcut:

The last way to boost how much you earn is to simply play more. Each time you purchase, play or invite friends you get points towards your VIP Club. The VIP Club increases your rewards multiplier the higher up the system you go. You can eventually quadruple the reward from the daily spin, and have two opportunities to do so.

Have fun, and let us know any of your own top tips or favourite cues.