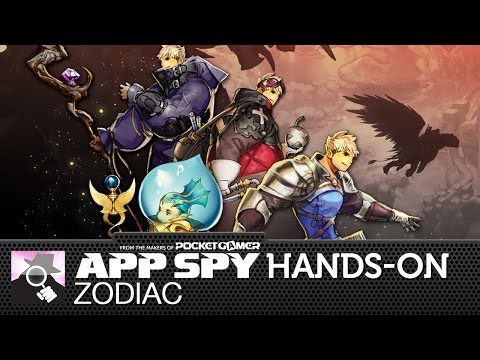 I find myself riding a griffin in a desert, just able to make out someone in the distance. I'm told I have a letter for the Dynamoth King Wursla, and I must deliver it to his castle myself.

The lone wanderer ahead is a Piscean by the name of Kayla. Her seven children have been taken by the Dynamoth; she asks me if I can look for them. Hyuum that I am, whatever that is, I agree to help and press onward.

The music is foreboding and uneasy. Each area is riddled with small, mysterious black clouds. As soon as they get a whiff of me passing by they loom closer. A dramatic arrangement kicks in, heavy on the brass.

My merry band of three is now faced with several enemies. Two rocky creatures: one dark, one light; a floating pixie, and a tiny wee creature wielding a shield and bo staff. They seem a little agitated at our presence.

A semi-circle of option buttons appears before me. I tap away. A few minutes pass.

Zodiac is the codename for the upcoming 2D sidescrolling pseudo-JRPG from Kobojo. I'm in their Dundee headquarters, playing an alpha version of the game.

The game itself is truly beautiful. A living painting of a game that owes much of its looks to the stylings of Vanillaware's back catalogue: Odin Sphere, Muramasa: The Demon Blade, and Dragon's Crown to name a few.

The parallax backgrounds, lively characters, and detailed animations are all painstakingly hand-drawn, then manipulated accordingly to make them pop, giving the impression that they're almost 3D.

Signs of the Zodiac

Back to the battle - I'm a few minutes in to my first turn-based encounter, and I genuinely have next to no idea of what I'm doing. This alpha has nothing other than icons to denote the moves each of my characters can use.

I bluster my way through the first battle, throwing taunts and debuffs at my foes when I should really be focusing on group, heavy, and basic attacks.

After weeks of playing Final Fantasy Record Keeper I'm used to tackling three waves of enemies within a couple of minutes or less. Eight minutes have passed in this, my first battle.

While I understand text littering the screen to detail each move could detract from Zodiac's charm, it's a necessary evil I really could have done with.

These niggles are worrying, but thankfully Kobojo is fully aware of these issues. Its goal is to narrow down each battle to two minutes or less, with boss battles taking up to 10 minutes.

Each icon and ability will be fully signposted in the final version, clearing up my other main gripe. One issue Kobojo has no plans to address, however, is the lack of a flee option to escape battle.

Eventually I figure out how to change my character's job class. He is an alchemist by default, able to chuck bombs and breathe fire. I can sacrifice his turn to change over to any of the other available classes in a similar fashion to Final Fantasy X-2.

There will be 12 all in all, each corresponding to a sign of the Zodiac, with thematically suitable elemental attacks. I believe the three available in the demo were Sagittarius, Gemini, and Capricorn, but I couldn't tell you for the life of me which was which.

Oddly, I found myself much more at ease fighting bosses. I would end up unintentionally inflicting each towering beast with so many status effects that they'd be rendered useless, leaving me to chip away with an occasional attack.

Apart from each class's basic attack, each move has a cooldown timer depending on its power, meaning you'll have to mix up your plan of attack to make the most of each battle. In turn this means there's no need to fret about MP.

Thankfully, health management is also a breeze as you only need be concerned about your HP in battle. After each bout you will find yourself fully healed and ready for the next session.

If your party does fall in battle it's not the end of the world - you'll just warp back to the last checkpoint you used.

While I can't say at this early stage that I noticed their touches, Zodiac's hundreds of pages of dialogue supposedly rivals Final Fantasy XV, and there are plans to branch out even further with additional campaigns and expansions over the next few years.

Zodiac will be arriving on iOS devices and PS Vita in the latter half of the year. It will be a free-to-play title, with the intention of monetising via weapons, items, and consumables rather than locking off areas of the game.

The final game will include a deep crafting system, asynchronous multiplayer, and a 12-hour campaign if players wish to rush through the game.

I am quietly confident that if all the pieces fall in the right place, Zodiac could be the definitive RPG experience on iOS, rivalling the best that the PS Vita already has to offer.