Android
| You Must Build A Boat

Since launching his tile-matching RPG sequel You Must Build A Boat (YMBAB) on June 4th, solo developer Luca Redwood has had to battle pirate copies appearing on the Amazon Appstore.

First of all, Redwood discovered a pirate copy of YMBAB on Amazon's app store on June 9th. He revealed this in a tweet that simply said "Not me" with a link to the pirate copy.

That one has since been taken down but less than 24 hours later and there was another pirate copy of Redwood's game on the Amazon Appstore.

This one was brought to Redwood's attention by a fan via Twitter. Redwood then spread the word with his own tweet, stating that the "Amazon appstore was free of pirate copies of YMBAB for approx 18 hours."

Worse still, it's a few days later and this pirate copy by a developer called Space Cube is still up for sale. It has yet to be taken down by Amazon. 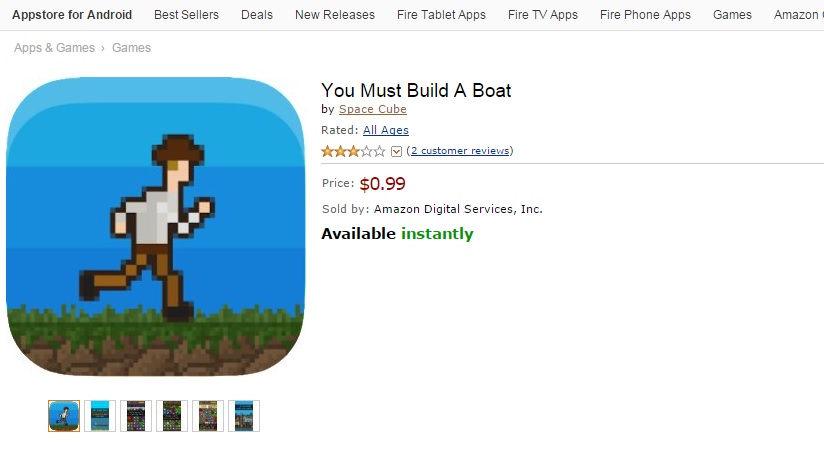 A popular game seeing pirate copies being sold on Android isn't particularly surprising. We've covered this before, as ustwo reported that Monument Valley saw a 95 percent piracy rate on Android.

Android's high piracy rate also caused Madfinger to change the payment model of its shooter Dead Trigger. After a month on Android it went from being sold for 99c to being free to play.

Unfortunately, then, piracy on Android is expected. But Amazon seem to be facilitating it in the case of YMBAB by letting not just one but two pirate copies of the game to be sold on its app store.

Hopefully, the pirate copy of YMBAB that's currently up on the Amazon App Store will be taken down shortly.

Stopping by Starbucks in the UK? Grab Silver Award-winning You Must Build A Boat for free

There are a lot of games on sale this week, here's what we think you should get