Perfect for little ones

Yo-Kai Watch is said by many to be the next Pokémon, both in its popularity, as well as in some of the show's similarities.

The game has you hunting down mischievous creatures known as Yo-Kai with the use of a special watch as they cannot usually be seen by humans.

Once spotted, you then battle them and can capture them to use in later battles. So, yeah, just like Pokémon, really.

November 6th, the day the bundle will be available, is actually the game's release date on 3DS in North America.

It's already out in Japan (where it's sold over 8 million copies) and will be coming to other countries at a later date. 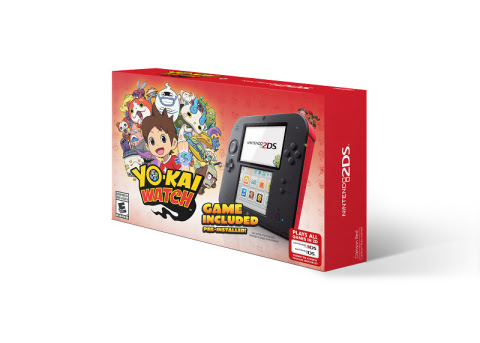 Oh, and if you don't know, the 2DS is made as an entry point to Nintendo's handheld systems. So, it's mostly for small kids.

It doesn't fold like a 3DS so it doesn't break as easy and it plays a range of compatible 3DS and DS games in 2D.

Play demos of Yo-Kai Watch and The Legend of Zelda: Hyrule Warriors Legend, out now in the Eshop