For most of us, stumbling about in a chilly forest - lost, confused, and alone - is called "camping".

But for the creative Swedish bods at Simogo, it's actually a ritualistic spirit quest, which lets you bend the very fabric of time and space to have a sneaky peek at the future.

It also involves a series of logic puzzles, apparently, with symbols and keys and windmills and babies. Year Walk is essentially an escape-the-room game - just without the room.

The puzzles are quite straightforward - and there aren't too many of them. But they're still very clever. I can't even tell you about some of the smartest moments of this game as they're lodged deep within spoiler territory.

Also, as in Xbox Live Arcade's Fez, you'll want to keep a notepad nearby to jot down clues and document anything that might be remotely useful in a future puzzle. Cryptic symbols etched in a tree, perhaps, or the arm movements of a possessed doll.

You'll need to write those things down, because Year Walk is not a game that's going to hold your hand. You're left to figure things out on your lonesome.

There's no tutorial, no hint system, no map, no characters to talk to, and no wacky anthropomorphic sidekick for assistance. It's actually quite liberating to be treated like an adult, for once. And it's always more rewarding when you finally solve a tricky puzzle without any help.

While the conundrums are certainly ingenious, there's more to Year Walk than a simple parade of puzzles.

There's also the pervasively uneasy atmosphere. This game is quiet - there's often no noise other than the crunching snow beneath your feet - and claustrophobic - the hulking black letterbox borders constantly restrict your view.

It's also creative. I don't know what's in the water at Simogo, but the weird and wonderful ideas the developers have dreamt up are like something out of a children's book penned by Tim Burton, or a Halloween special of The Mighty Boosh.

And there's the story. It's not overbearing - there's actually very little direct dialogue in this game - but what little is there is endlessly intriguing. As with any good page-turner, you won't want to put this game down until you get to the end.

It's quite a journey, too. Year Walk is a beguiling adventure, and a truly memorable experience. Throw in those clever puzzles and - if you enjoyed games like The Room and Sword & Sworcery - you've just found your next essential adventure. 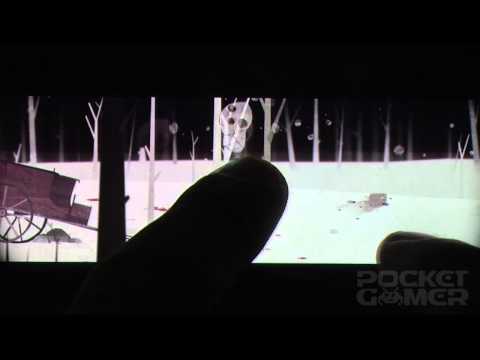 Year Walk is ingenious, imaginative, and intriguing, and only let down by its short runtime and easy puzzles. All said, Simogo is still the iOS indie to watch
Next Up :
Pawnbarian review - "A minimalist roguelike that's hard to put down'"