Apple Arcade’s Wonderbox: The Adventure Maker has added another new expansion to its ever-growing universe called the Masters of Magic. Check out the trailer for Masters of Magic below: 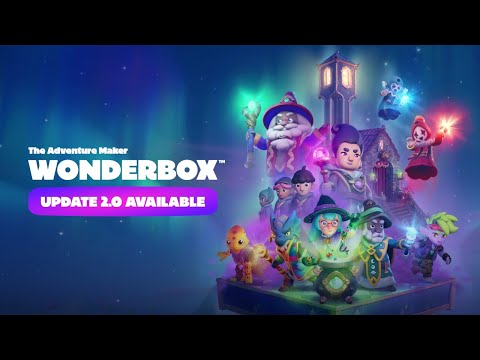 The new campaign will provide players with skins, items, blocks that have never been seen in the game before with lots more cool stuff coming too! With this update, players can join the Spellspark Academy where they will embark on a Harry Potter-esque adventure surrounded by magic, wizards, potions, and lots of secrets.

With six new witchy skins to choose from, players can create the hero they want to become! Around you is also a mystical environment filled with magical items waiting to be found. Gather potions from around the world to create the craziest concoctions in the Fortune Cauldron.

Hourglasses are another collective item that can be found. But the coolest part of this expansion is the Transmutation Switch, which will essentially allow players to bend reality in whatever way they wish. Time to play God! If you are into combat then you can also study the arcane arts and attain mastery in fiery and icy spells.

A brand-new world of possibilities is introduced with Masters of Magic in the form of new and innovative challenges, enemies, puzzles, and platforms. Players can also increase their Wonderbox level to 80 now as they make it through the new expansion.

Wonderbox: The Adventure Maker is also known for its unique creator mode allowing players’ imagination to flow to create some of the most mesmerizing lands. This content update also celebrates the creation of over 50,000 user-created adventures! And with this expansion, players can create even more adventures using magical blocks. The new Follow Creator feature will let players discover new adventures with ease.

Download Wonderbox: The Adventure Maker on the App Store. You will need an ongoing Apple Arcade Subscription to play the game.

Check out these awesome Apple Arcade games too!
Next Up :
Brown Dust 2, the sequel to the hit mobile RPG Brave Nine, reveals new story information in latest trailer

Wonderbox: The Adventure Maker is a create-your-own-adventure game out now on Apple Arcade

Wonderbox: The Adventure Maker is an upcoming game for Apple Arcade that allows you to create your own levels