Panic Button performed a minor miracle last year when it crammed the super-slick FPS Doom onto the humble Switch.

Now it's pulled off a similar feat of technological mastery with Wolfenstein II - with more or less the same inevitable compromises.

When it landed on PS4, Xbox One and PC in October, Bethesda's shooter attracted praise for its daring plot and for the impressive rendering of its brutal alternate-history world.

The former survives here more or less intact. The latter somewhat less so.

You play the part of grizzled series veteran William "B.J." Blazkowicz, a Captain America-like super soldier - if, that is, Captain America had woken up really grouchy from his hibernation to a world where the war had gone the other way.

As the game kicks off in 1961, a technologically advanced Third Reich has a well established stranglehold on the world. Cultural events that we're all familiar with are given a sharp, darkly humorous Nazified twist via snippets of found lore.

With your health failing and your very movement dependent on a hi-tech suit of armour, it's up to you to lead a series of guerrilla assaults that stray right into the heart of an occupied America. 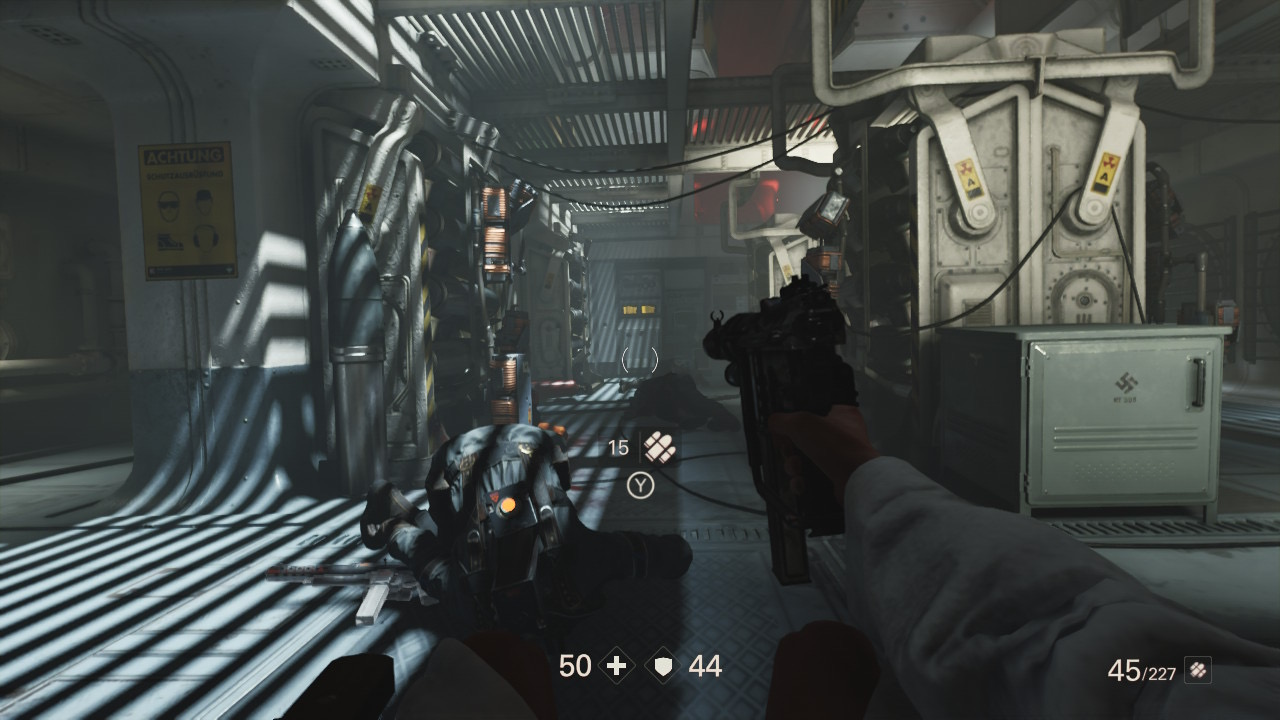 We should probably address that 'II' in the title early doors. Wolfenstein II follows directly on from the conclusion of the first game, the events of which are presented to Switch players via a brief summary video.

You'll definitely be at a disadvantage if you haven't played the first game. It's easy enough to follow the plot, but you'll have virtually no context for many of the game's more poignant moments.

It's a crying shame Bethesda didn't commission the earlier game first, if only so that players could experience the entire story arc. Because rather surprisingly for a gung-ho FPS, the story in this modern Wolfenstein series is actually pretty good.

Sure it's overwrought and shlocky, and it occasionally strays into realms of questionable taste. But it doesn't shy away from tackling heavy themes like race, morality and wartime atrocities head on, without flinching. This is about as far from a Nintendo game as you can get, tonally speaking. 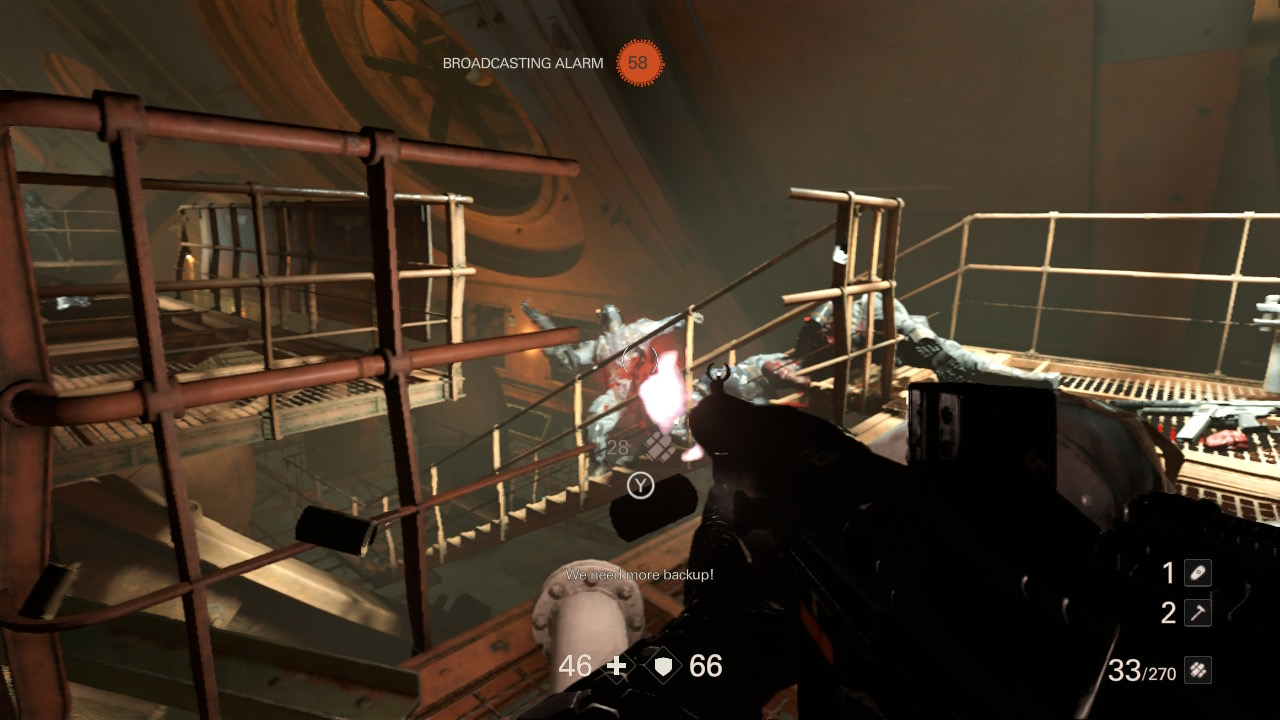 Of course, this is no narrative adventure. Explosive action is very much to the forefront here, and as a still-rare triple-A Switch FPS Wolfenstein II: The New Colossus acquits itself remarkably well.

The movement and combat are precise and weighty, with brutal insta-kill melee attacks and guns that need to be tamed before they can be aimed. If you came off of Doom hungering for more visceral gunplay, this is your natural next step.

Not that you have to tackle each encounter head-on, as you're encouraged (but not forced) to adopt a stealthy approach. Take out the level's enemy commanders without being noticed and you'll avoid a whole bunch of potential reinforcements.

It's a genuine choice whether you want to play the game aggressively, stealthily, or a mix of the two. Wolfenstein II's two main upgrade systems feed into that, with flexible weapon modifications that can add either punch or precision, and a passive perk system that improves your abilities according to how you play the game. 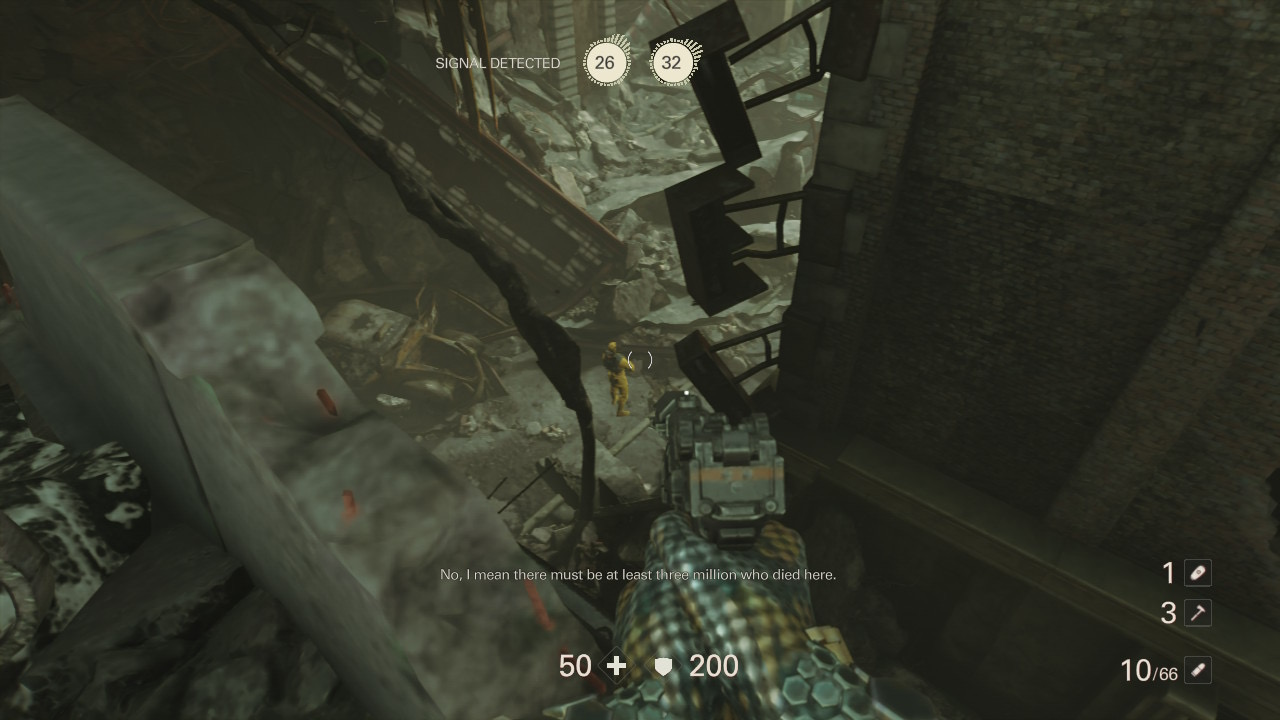 Panic Button has ensured that the action moves fluidly on the Switch, too. It certainly feels the part, with the controls mapping well to the Switch's set-up, though a Switch Pro Controller is recommended.

Indeed, playing Wolfenstein II: The New Colossus on your TV is a flat out superior experience. In the process of making the game feel right, Panic Button has had to strip right back the visual fidelity to an extreme degree, and the handheld experience in particular suffers a massive hit.

The game's resolution and texture detail have been bumped right down in both modes. With sizeable multi-layered levels and dozens of enemies, it's not hard to see why this was necessary.

On TV it remains playable, though the game's extensive use of light and shade and complicated, jagged level design means that you'll frequently struggle to make out details like armour pick-ups and (most annoyingly) patrolling enemies at medium to long distance. It can all look horribly muddy at times.

On the Switch itself it occasionally becomes an unplayable blurry mess, with more detailed textures only loading in when you're right on top of them. It can be a literal headache.

Like Doom before it, the simple fact that Wolfenstein II: The New Colossus is up and running in a playable form is to be commended. This is a slick and sizeable FPS with a memorably hard-hitting plot and satisfying gunplay.

However, it would be wrong of us to leave it at that and to not point out that this is clearly not the way the game was meant to be played. If you have one of the other consoles or a halfway decent gaming PC, you should undoubtedly try and grab the game for that instead.

If you're after a meaty shooter on the move, of course, then those platforms simple won't be able to provide an answer like this Switch version does. But even in that context, Wolfenstein II on a handheld is patently not the best way to play this brilliantly immersive FPS.

Wolfenstein II: The New Colossus is another admirable Switch port from Panic Button, which preserves the slick gunplay and hard-hitting story of the original. However, severe technical constraints make this a heavily compromised experience - especially in handheld
Next Up :
Jade Order review - "An puzzling path of the warrior"