Pixel Toys are bringing two new Skaven units to their Clash Royale style MOBA, Warhammer Age of Sigmar: Realm War. Alongside that, there'll be a few new events as well to give players additional things to do. If you're Warhammer fan but haven't played Realm War then you can check out our review where we thought it a solid game.

If you're not familiar with Warhammer lore, Skaven are effectively big rats and in my opinion, the best Warhammer race. The first of these two new units are Warlock Jazzails. These are a pack of Skaven marksmen that will deal long-range piercing damage to multiple targets.

The second unit is a duo of Skaven operating a device called a Warp-Grinder. This is a type of excavation drill and will see the unit burrow underground and surface again beneath an enemy structure where they will proceed to attack it. Both new units will be rare. 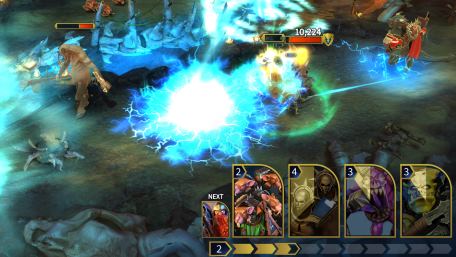 The first of the two new events will be called Grand Alliance Events. This will see players go head to head with specific alliance troops and the same decks. Winning these battles will see them climb the leaderboards where they will earn themselves increasingly valuable rewards.

The second new event will Spotlight Events. The idea of this is to introduce players to new units so they can get an understanding of how they work, develop tactics for using them and how to counter them. Similarly to the Grand Alliances events both players will use the same decks to ensure it's an even battle.

If you could use another MOBA in your life or are a Warhammer fan with a penchant for Skaven then Realm War is available on the App Store and Google Play. It's a free-to-play game with in-app purchases.