For a while there, it appeared as if the UbiArt engine had been forgotten about.

Where once there was the notion that this new engine would power a multitude of games beyond Rayman Origins and that it would be made free for developers of all skill levels, these promises have gone, by and large, unfulfilled.

At Ubisoft's Digital Days 2013 event over in Paris, however, there's been a lot of buzz around the UbiArt engine... and the newly announced games that will be powered by it.

One of these is Valiant Hearts: The Great War, a game Ubisoft hopes will do for World War I on video game platforms what Blackadder Goes Forth did for the same subject on TV.

So, it's World War I and things are, as you might expect, a bit rubbish for all five characters under your control (plus the eminently lovable dog, Walt) in this mostly linear game.

The game itself is presented in a comic book style. Each of the heavily caricatured characters (exaggerated stereotypes of Frenchmen, Germans, Brits, et al.) has his own motivation and reason to make it through the war alive other than, you know, because he enjoys breathing. 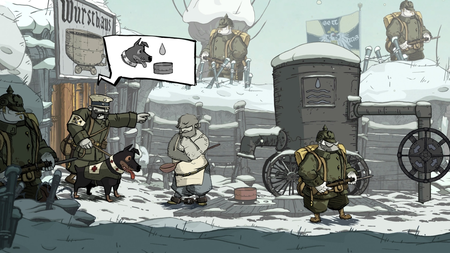 Take Freddie, for example: he's an African-American soldier based on real-life Medal of Honor recipient Freddie Stowers. He's a large sort of chap, who uses his brute force to cut through enemy wires, toss grenades long distances, and knock out enemies with a single punch.

As if partly in homage to the bravery Stowers displayed during the Great War, the level in which he's shown off features a man running towards mounted machine gun turrets and causing heavy damage to enemy units.

Yet Ubisoft Montpellier presents all this in fairly humorous fashion. Troops who retreat in bug-eyed panic at the towering hero's efforts guard the occupied bridge you have to demolish. The heroic soldier wanders up to their positions with a burly swagger and a complete disregard for his own personal safety.

A wild stab in the dark

It's the same black humour that runs through the Blackadder series.

In the far background, a pitched battle is occurring, with dozens of lives wiped out in a matter of moments. In the foreground, however, you're idly rubbing the belly of your faithful canine pal.

The death of thousands of human beings offset by intensely human moments of humour. Highly unique juxtapositions, if you will. 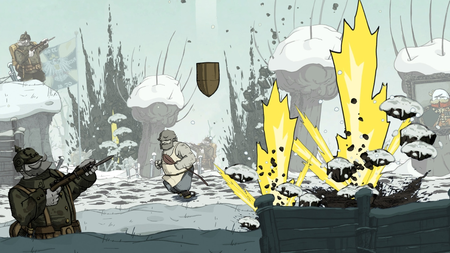 There's a passion and honesty pouring out of the Valiant Hearts: The Great War Ubisoft Montpellier dev team.

There's a genuine desire here to use this wonderful opportunity to make a game about a war without a clear enemy and without real winners that ISN'T a tasteless first-person shooter or a dry strategy game.

The team is basing much of Valiant Hearts: The Great War on letters sent from soldiers during the war and on photographs and historical records. It's all very admirable. And if Ubisoft Montpellier pulls it off, it could make for a captivating action-puzzler that opens up interest in the events of the Great War to a wider audience.

If there's a potential pitfall that Ubisoft Montpellier will need to dodge, though, it's the subject of difficulty. The areas we were guided through featured very simple puzzles (perhaps too simple) and none of them was a revolution in games design.

This was an early showing, of course, and the team was demonstrating levels in which core concepts were introduced, such as using Walt the dog to fetch a puzzle piece just out of reach.

Ubisoft Montpellier also needs to avoid making the game ultra-difficult. Much of the appeal is in the character portrayals, and seeing the events of the war through another person's eyes.

If there are too many tough spots along the way that disrupt the immersion, players will find it difficult to maintain empathy with the protagonists. 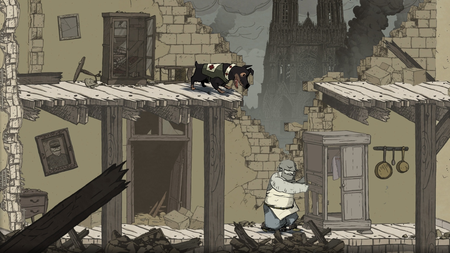 There's plenty of time for Ubisoft Montpellier to get this balance right, though, as the game's not due out on iPad until 2014.

We'll have more on Valiant Hearts: The Great War in the months leading up to its release.

Note: This preview was written based on a guided demo, which was shown running on a PlayStation 4.
Next Up :
Figure Fantasy adds new figurines, limited in-game rewards and more in "A Certain Scientific Railgun T" collab