It's a cold, cold war in Playdek's adaptation of Twilight Struggle, out now on iPad

It came as a last minute surprise late last week but Playdek has released Twilight Struggle Mobile, the digital adaptation of the boardgame of the same name that racked up a lot of awards.

It lets you choose between the U.S.A or the U.S.S.R during the cold war era. You'll use cards to gain more influence over certain zones of the globe but you must avoid escalating to the nuclear stage of the war or it's game over. 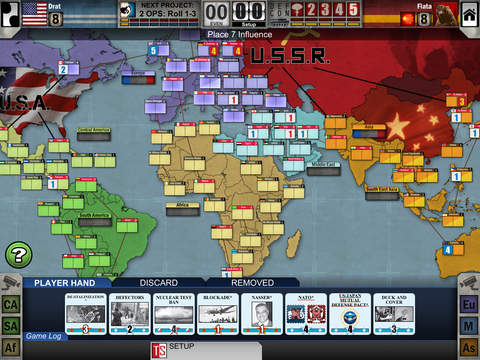 The game's only out on iPad for now as it's a better device to experience these kinds of games. It lets you play against an AI or against other players via the included asynchronous mode or pass and play mutliplayer.

Be aware that there's a bug right now with the tutorial on certain devices but it should be fixed soon. Get it now for £5.99.