In a strange way, Trials games have always been about frustration - the red raw anguish as you lose your balance on the last obstacle when you were heading for a perfect run that drives you on to keep trying.

Trials: Frontier doesn't have that edge to it. With its cartoony graphics and smooth-edged explosions comes a more relaxed approach to smashing a motocross rider's spine into a bunch of barrels.

In all aspects it offers more casual Trials experience, but I don't mean that in a derogatory way. This is Trials sliced into manageable, entertaining pieces.

It's unlikely to have you weeping into you iPhone on the bus home from work, or hurling your iPad at old ladies in the park to relieve the pent up aggression.

But it does deliver meaty chunks of wonderfully well-balanced physics-based motorbike platforming, and that's nothing to be sniffed at. 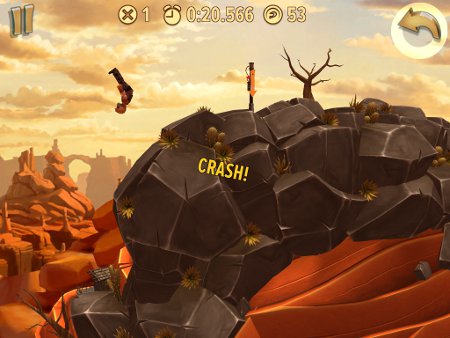 It's the return of Pocket Gamer's famous spot the bike competition

The game follows a loose story about prairie towns and secret beacons, most of which it's worth ignoring. A cast of scratchy characters chuck quests at you, and almost all of them involve tearing down a bumpy track, trying to make sure you don't shatter your spine.

There are four buttons on the screen to facilitate the avoidance of spine-shattering.

Two control the direction you're moving in, and most of the time you'll have the forwards one of these pushed down, with reverse usually saved for when you're stuck.

The other two buttons let you shift your weight between the front and back of the bike - the basic ingredients of any Trials game.

Carefully tweaking your weight as you bounce, roll, and thrash through the obstacles can shave seconds off your time, or see you planting your face into a structure because you were leaning too far back. 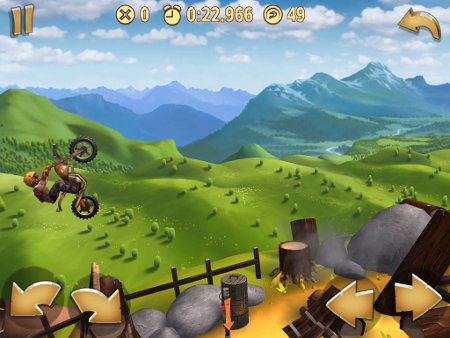 Wait, who stole the track?

The quests you're given usually involve beating a rival, grabbing a specific piece of kit, or performing a set number of tricks to impress an obnoxious little kid.

When you're searching for kit you have to finish the level, then take a spin on a wheel-of-fortune and hope it lands on the right rusty lump of metal.

You can even the odds a little by keeping a finger pushed on the item you're after, and spin again by spending some gems. If you do spin twice you get to keep both of the things you collect, which is nice.

The tricks you need to perform are simple back and front flips, with the odd wheelie thrown in for good measure. As your mini-manager demands more you'll need to figure out where in the level you can fit them all in.

Each run costs fuel, which refills after time, and usually gets topped back up when you've earned enough XP to progress to the next level.

Retries from within the run don't cost anything though, so you can pop back to the last checkpoint, or restart the entire run without wasting your fuel supplies. 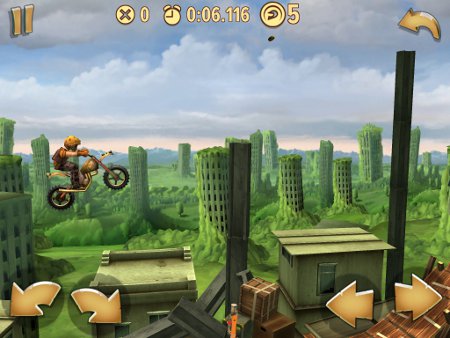 The apocalyptic setting was nothing to do with me

While the shift to the free-to-play model might upset some people, in the hours I've played it's never really come up. You're usually topped up with fuel before it becomes an issue, and there's enough currency floating about that you can buy everything you need.

Yes, if you wanted you could throw out some cash and get a faster bike quicker, but there's enough fun in riding through the levels that you don't really begrudge the occasional grind back through older stages.

Trials: Frontier isn't quite as deep an experience as you might find in the less mobile versions of the game, and it lacks the hardcore, razor sharp edge that made the series so popular.

But if you're looking for a bike-balancing blast with a bit of pop then you're going to find a lot to like here.

A nice game of tricks and tribulations, traditionalist Trials fans might be put off by Frontier, but newcomers will lap it up
Next Up :
Hero Emblems II review - "Lovely visuals and music, but match-3 combat lacks strategic depth"