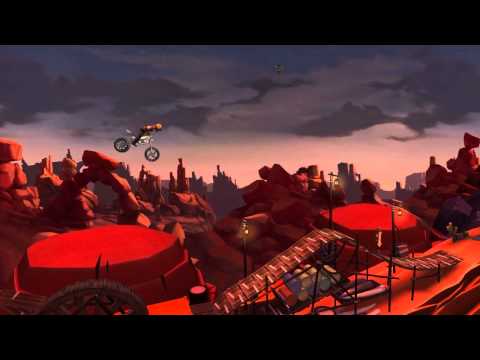 A couple of weeks ag,o RedLynx released a massive update for Trials Frontier, its free-to-play take on the classic Trials series.

This update contained new missions, costumes, and a crucially important banana skin (to throw under the wheels of inconveniently skilful ghosts).

We caught up with RedLynx at Pocket Gamer Connects, which is taking place this week in Helsinki, and discovered what else the studio has in store for Trials Frontier.

The example RedLynx's Justin Swan gave was that you might be asked to beat ten rivals on a track. As a reward, you might get a "Robocop" outfit (in quotation marks to indicate that it has nothing to do with RoboCop). There will be more new costumes, too.

And, best of all, there will finally be PvP multiplayer. It'll be asynchronous, which presumably means you'll be racing against - and possibly banana-sabotaging - real human ghosts as well as AI ones.

The studio is also toying with a 'track on fire' concept, which would involve the track getting hotter and hotter as racers compete on it.

But don't get excited just yet - the PvP update won't be along for a few months.