No More Heroes is a series that many hold quite dear to their hearts, so when the Switch game Travis Strikes Back: No More Heroes was announced, a great many people went wild at the idea of returning to Travis Touchdown's life and adventures.

And I mean, yeah, it wasn't great. It's still pretty good though - if you like a bit of hack 'n' slash action to kill an afternoon with, you can't go far wrong. 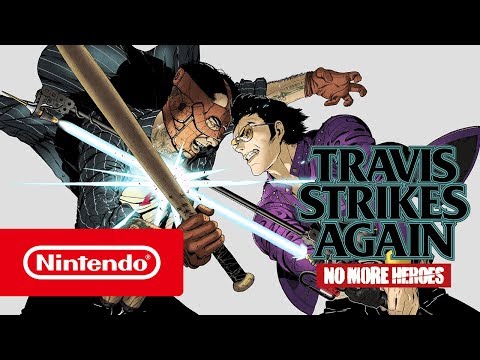 You, yes you, could win yourself one of three codes for the game, delivered straight to your inbox, and all you have to do is fill in a Google Form. What's simpler than that? Absolutely nothing, that's what.

As with all competitions, there are a few caveats. The key on here is that you MUST have a European account on your Switch. The codes will only work EU accounts. You can, in theory, not live in Europe and still have an account that says you do, but that's down to you to solve.

And you need to be relatively quick - we'll be shutting this baby down on Wednesday 6th March at 5pm, which is pretty much exactly one week from now. So get cracking!

The Google Form is below - it's three quick questions, one of which is there just to make sure you've been paying attention to what I've said above. Fill it in, cross your fingers, and we'll be in touch if you win!

- Codes are only usuable with an EU Switch account.
- The competition will close at 5pm Wednesday March 6th.
- A winner will be picked at random no later than 7 days after the deadline of the competition.
- As promoter, Steel Media's decision is final.
- By entering this competition you agree to Steel Media's Privacy Policy and Steel Media's Terms & Conditions of Service.