Time is of the essence

We're often guilty of reductive and slightly lazy comparisons when describing new games. This new game is like this classic with elements of this one mixed in. That sort of thing.

As you can see, it appears as if we've used exactly the same shorthand technique with Time Surfer, the new game from Bean's Quest developer Kumobius.

The truth is, though, Tiny Wings meets Braid is the phrase used in Time Surfer's own press release.

We'll forgive the shameless name dropping on this occasion, as the first thing we thought when we viewed the gameplay trailer (see below) was "that looks a bit like Tiny Wings but with a cool rewind feature." 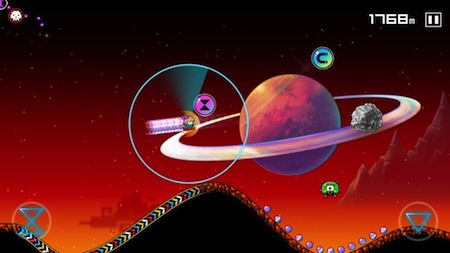 Said rewind feature could indeed be likened to Xbox 360 indie darling Braid, though you won't be warping time to solve any brain-melting puzzles here.

Time Surfer is a fast-paced endless runner with the same undulating landscapes and accompanying rhythmic swoop mechanic as the aforementioned Tiny Wings.

You'll be using the rewind feature to thread your little surfer through precariously tight gaps that you might not have seen at the game's normal frenetic pace. There's also an attack element as you stomp on enemies for a speed boost.

Its graphics are a pleasant mix of retro-Japanese zaniness and psychedelic sci-fi, with spacey backgrounds mixed in with trippy organic elements.

There appear to be a hatful of pop culture references in the various characters you can unlock (some of which are pets that give you new powers), from a DeLorean car to a Terminator-like biker figure. We even thought we saw a Yellow Submarine in there somewhere.

Time Surfer will be out for iPhone, iPad and iPod touch in January.